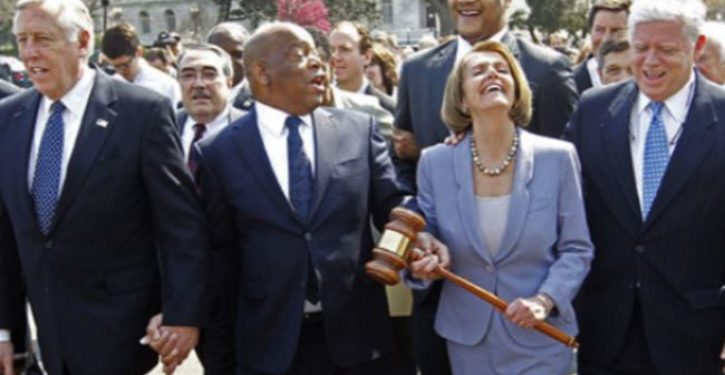 If I didn’t know better, I’d think the Democrats were holding a contest to see who could say the most ironic thing about the Republican plan to dismantle the Affordable Care Act.

One of the frontrunners is onetime Speaker [score]Nancy Pelosi[/score], who said the GOP plan to repeal the law is an “act of cowardice.” This from a woman who presided over back-door meetings to cram this law through Congress without a single minority-party vote.

The man whose name the law bears also weighed in, according to a CNN tweet:

Something worse? Is that as in “from bad to worse”?

But if there is a winner so far, it has got to be Rep. [score]Elijah Cummings[/score], who began his comments by noting that the Republicans “have had seven years to” replace the unpopular law “and haven’t done it yet.” Cummings conveniently leaves out the eighth year — the year Obamacare was signed into law — but that is because the GOP proposed dozens of recommendations, such as the portability of premiums across state lines, all of which were summarily dismissed by the party in power. As for the seven years since, House Republicans have introduced more than 400 individual bills designed to improve our nation’s health care system. None got past the president’s desk.

Elsewhere in Cummings’s lament, he speaks of Americans “dying in the streets” if Obamacare is repealed. To evaluate that bold claim, let’s consider health care in America before and since the passage of the Affordable Care Act. Before the law was signed, nearly 25 million Americans relied on hospital emergency rooms for primary medical care. In fact, the strain that that model imposed on emergency departments was one of the reasons given for rushing Obamacare through Congress.

So what has happened in the years since the law’s passage? According to a report by the American College of Emergency Physicians, the use of the ER in place of a primary care physician has increased. The graph below shows the impact since Jan. 1, 2014, when the requirement to have health coverage took effect. The volume of emergency room patients has increased overall by 75%, while only 5% of ER doctors report a drop in patient volume. 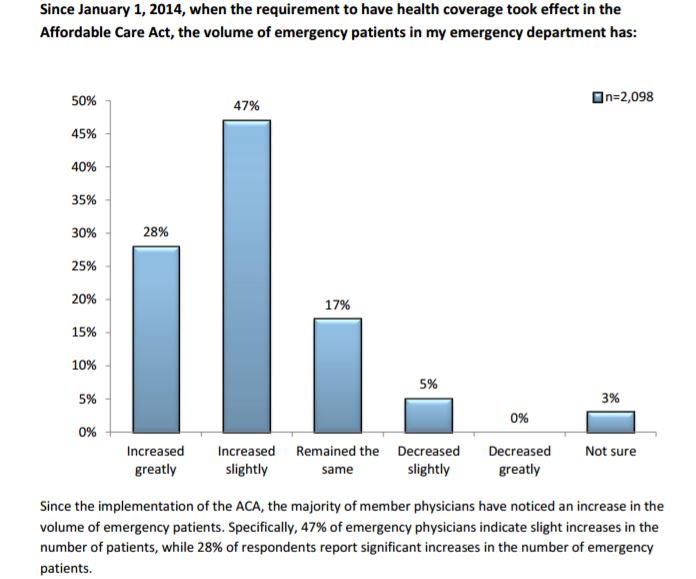 There’s no doubt that the party out of power is distraught over the failure of a law it rejoiced over that controlled one-sixth of the American economy. There’s even less doubt that their fearless (fearful?) leader feels the sting most. But what hurts is not a realistic fear that the nation will now go to pot. It’s that they fought hard (blindly, one might submit) and lost. 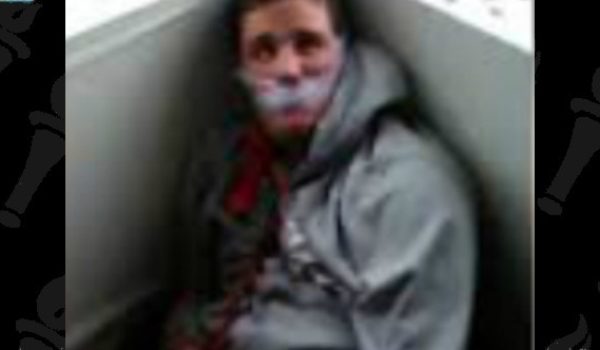