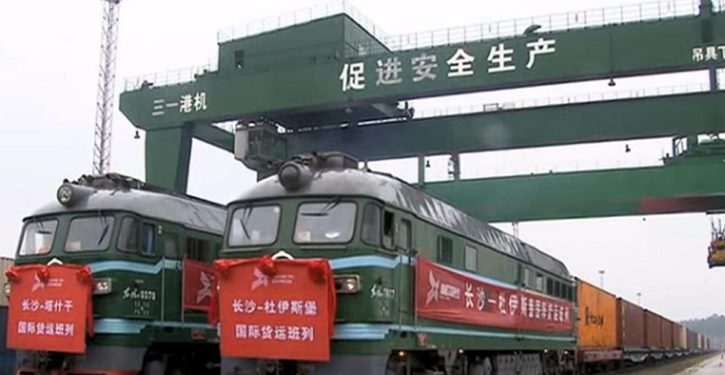 This development is noteworthy for a number of reasons, but I want to highlight just one.

On New Year’s Day, China inaugurated the first freight train service to London.  We’ve known for a long time now that the world is becoming a “smaller” place, in that it is more and more accessible, from great distances, with each passing year.  But we rarely stop to think, these days, about which realms of human affairs are being affected by the increase in accessibility.

One of them is military.  The interior reaches of Asia have been a conundrum for military logistics for millennia.  Trying to move troops and supplies across the vast Eurasian land mass has defeated many a commander, leaving him overextended and exposed, at or on the way to his destination.  Famously, in World War II, the German army was bogged down trying to ship materiel by rail into parts of Russia because the gauge of railway track was different.  The track suitable for German and other European trains literally cut out, and those trains couldn’t go further.

My point is not so much that China’s new China-Europe rail service, installed and inaugurated incrementally since 2008, has solved the German army’s problem from World War II.  It’s that a meaningful obstacle to waging war into Central Asia, and across the northern-Eastern hemisphere, has been overcome.  Hold and defend the rail route, and you can move your armies in a way no one ever could before.

Yes, air power can conceivably make that a temporary advantage.  Special forces could as well.  But air power is not invincible.  And rail patches damaged by special forces can be repaired much faster than whole railway routes can be established.

Asia is not impenetrable from either end now.  The calculus of war-making there has changed.  The U.S. operation launched in Afghanistan in October 2001 was an early preview of this reality; possibly the earliest.  The geographic depth at which carrier-based aircraft were able to project power into the heart of Asia had never been attempted before, and would have been considered unrealistic even 10 years earlier.  Now it’s considered a normal working day for a U.S. aircraft carrier.  There are a number of other developments as well, but that one has been tested in combat.

The conditions for war-making arise before anyone decides to use them.  Once they do arise, it is foolish to bet against someone coming along who will eye them with a martial vision.  I wrote about something similar on a smaller scale five years ago, when Hugo Chavez ordered a big batch of main battle tanks for Venezuela, at a time when he was just completing a road infrastructure connecting Venezuela with Colombia that would allow him deploy those tanks into his neighbor’s territory, along routes that could never have been used for that purpose before.

If you build it, they will come.  Nothing is going to happen tomorrow.  But in the sense of conditions for military operations, Asia is in play today in a way without precedent.  A lot of our geopolitical thinking will be changing.  Believe me, the use of the central Eurasian space for continent-spanning military purposes is already a glimmer in someone’s eye.  I’ll conclude with one of Dyer’s Axioms for Intelligence Analysis: “If you can imagine it, someone is trying to do it.”

Obama then: Laughs at Trump for suggesting election could be rigged. Obama now?
Next Post
5 ways Trump could negate December’s anti-Israel UN resolution