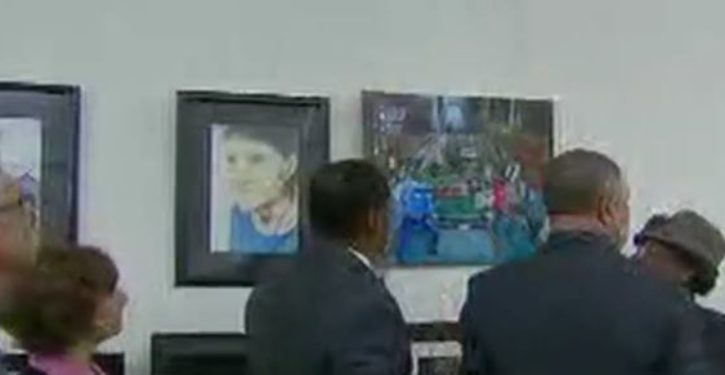 “Guernica” it ain’t, though a painting by a black teenager from St. Louis that depicts cops with pigs’ heads shooting up a black neighborhood is being hailed as if it were a newly discovered work by Picasso.

The work, according to the St. Louis American, won top honors in this year’s U.S. Congressional Art Competition, held annually, and since the end of April has been hanging on a wall in the U.S. Capitol building.

The painting is untitled, though after you glimpse it and read more about the motivation behind it, you’ll probably come up with some suitable names of your own.

Here’s hoping that Clay doesn’t plan to give up his day job to become an art critic. The painting, which appears below, is about as ham-handed as even an adolescent can get. Notice, for example, that one protester holds aloft a sign reading “Racism Kills,” while another carries the message “Stop Killing”; a third brandishes a sign reading “History” —something with which young artist Pulphus appears to have only a passing acquaintance. 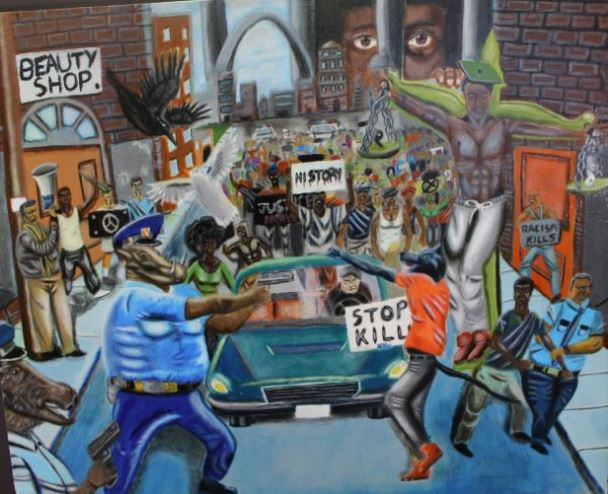 Not everyone who works on Capitol Hill is delighted to have in their presence what one senior Republican congressional aide described as “hate masquerading as art.” Jason Howerton of the Independent Review Journal reports having reached out to another, Rep. [score]Dave Reichert[/score] (R-Wash,), a former law enforcement officer, who said in a statement:

It is disheartening to see this depiction of law enforcement hanging in the hallway of our nation’s Capitol where officers work everyday to protect our safety and freedoms. Unfortunately, many people of influence have taken part in promoting offensive and inaccurate caricatures of the very people who do the most to protect our families. While I understand in some neighborhoods trust between police and communities has all but deteriorated, we must work on rebuilding these relationships and focus on our shared goals of peace and civility.

Middle East crisis building…without a U.S. aircraft carrier
Next Post
Charles Krauthammer: Trump should turn UN into condos with his name on it