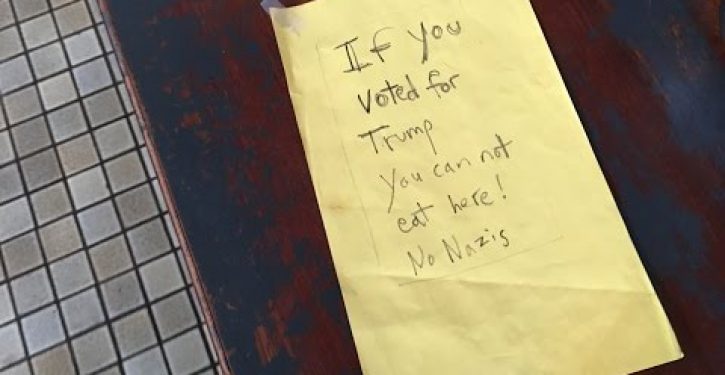 If Sir Isaac Newton were living today, he might append this corollary to his third law of motion: For every spiteful ideologically driven action, there is an opposite disproportionate reaction.

The owners of  Café 8½ in Honolulu are learning the full force of this law a day after the restaurant posted a hand-lettered sign in its window advising, “If you voted for Trump you cannot eat here! No Nazis.”

Before turning to the overwhelming — and overwhelmingly negative — response this op-food has generated, it is worth asking what its management hoped to accomplish in the first place. Were they expecting a flood of new customers who shared their unbridled hatred of the next president? And how did they intend to enforce this shibboleth? Would a member of the staff be posted at the door screening prospective customers to try to ferret closet Trump voters?

That’s a question they may not have to worry about answering, judging from the reviews the cafe is receiving on social media. Here are several comments from Yelp (h/t Eater):

And here’s what some folks on Twitter had to say:

Deplorables unite! Boycott Honolulu's Cafe 8 1/2 which is sporting a large sign telling Trump voters NOT to eat there! Okay, we can do that????

Café 8 1/2 on #Yelp: I’m a frequent visitor of this place but no longer. Trump was not my guy but I can’t stand big… https://t.co/qoZNphqUpN

I am in Honolulu a lot. If you are too be sure and boycott Honolulu’s Café 8 ½. They r banning @realDonaldTrump supporters. #Hawaii #HI ????????

Inclusiveness? You can’t eat at Hawaii’s 8 1/2 cafe if you voted @realDonaldTrump. Seems like old Jim Crow Dem-tactics to me. #stophatred pic.twitter.com/ZCxakoNxxb

It goes on in this vein, but I’m sure you get the idea. I don’t think there’s any question the people responsible for the sign have gotten the message. Then again, maybe they haven’t. Here’s the owner, Robert Warner, attempting (and failing epically) to walk back the initial protest.

A preview of Obama’s post-presidency
Next Post
Wait, what? Trump should be banned from Twitter because he is a global warming skeptic?