The timing is key here.

In a headline published earlier today, LU noted that a FOIA request from Judicial Watch produced a new report last week, on emails from November 2010 about a spike in hacking attempts against Hillary Clinton’s homebrew server.

Judicial Watch specifically cites two emails that discuss the attempts, which occurred on 27 and 29 November 2010.  There were 10 intrusion attempts altogether, on just those two days.  The email exchanges discussing them were between State Department IT official Bryan Pagliano and Justin Cooper, an aide to Bill Clinton.

In an email on 29 November, Pagliano told Cooper the following:

A lot of people knew who “huma” was in 2010.  Fewer in the American public could have identified Doug Band, a long-time aide to Bill Clinton who ran the former president’s personal office after 2001, and help develop the Clinton Global Initiative and the William J. Clinton Foundation.  Band’s first real public notoriety came in the 2011-12 timeframe when he and the Clintons basically went their separate ways, after Chelsea and Band developed a mutual hostility and reportedly had a falling out.

Band has suddenly surged into the headlines over the past 10 days or so, because of the thousands of emails now being revealed from Hillary’s tenure as secretary of state.  Cenk Uygur calls the Doug Band emails from the Clinton WikiLeaks trove the “Rosetta Stone” of Clinton corruption.

Yet someone knew to try to hack into a “Doug Band” account on Hillary’s homebrew server — and at a very specific, uniquely significant time.

Judicial Watch goes on to explain that the complete email exchange between Pagliano and Cooper was ultimately marked by the State Department as “REFERRED FOR CONSULTATION – USSS.”  This means it was referred to the Secret Service.

Judicial Watch points out the obvious:

Indeed.  But that’s not the only thing these emails show.  What else was happening at the end of November 2010?

Oh, gee, what do you know: in the exact timeframe of the 10 attempts on Hillary’s homebrew server, the infamous WikiLeaks dump of classified diplomatic cables was being made, via the five lucky media outlets that set up the databases for public access to the cables.

The media outlets made their public announcements on 28 November 2010.  By the second week of December, IT professionals were providing summaries of what had happened to an interested public.  The critical period for the diplomatic cables dump — in which the U.S. State Department took a big hit — was 27 through 29 November.

There’s more than one possibility here, but none of them is good.  Remember, the attempts were made on accounts thought by the intruder(s) to be on Hillary’s homebrew server — so whoever made the attempts knew in November 2010 that the private email server was being used.  The attempts were made the day before the official announcements of the WikiLeaks cable dump, as well as the day after.  That means some of them were made by someone who also knew the cable dump was about to break, even though it hadn’t yet.

Foreign governments with reasonably competent intelligence services could have know everything in this mix.  Heck, they could have been monitoring the whole drama via the emails flowing through Hillary’s server.

And then there are the customers of the Clinton Foundation and Hillary State Department Global Pay-for-Play Service, which included foreign governments and quasi-public entities as well as private business actors.

“Guccifer,” for reference, told the FBI he figured out about Sidney Blumenthal‘s separate account in March 2013.  He says he never hacked Hillary’s account.  That would mean he’s not the guy, in the November 2010 timeframe.

So, you know, why wasn’t it all just blasting on a Jumbo Tron in Times Square, for crying out loud?

One thing’s for sure: we know who did know all these facts in the period 27-30 November 2010, and yet did nothing about them.  I.e., the U.S. State Department, including, of course, Hillary herself.  (The earliest instance we know of in which Obama emailed Hillary’s private account, using a pseudonym, was in June of 2012.  That doesn’t mean nothing happened earlier.)

Out here in the American public, you could really start to feel left out. What are we, chopped liver?

Judicially-imposed tax increases if Hillary is elected
Next Post
Video: We fought the law — the musical duo of Clinton and Comey 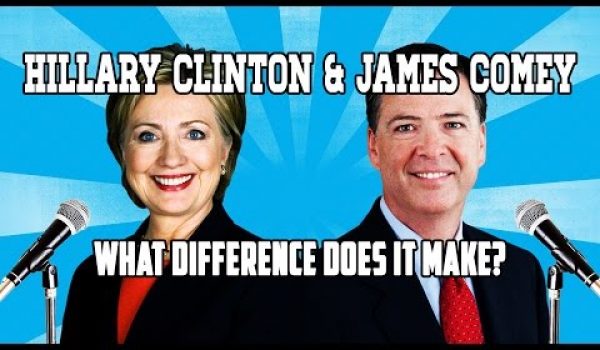