This is a breaking story, and there will be time to update it later.  But it’s important for people to get the word out, not only that Ammon Bundy and his co-defendants have been found not guilty on all charges, but that federal marshals who were present used a Taser on Bundy’s attorney, Marcus Mumford, when Mumford asked the judge to order Bundy freed, unless the feds had a detainer that would give the federal district a reason to keep him in custody.

First, the news about the acquittals (and one hung jury outcome):

A federal jury on Thursday found Ammon Bundy, his brother Ryan Bundy and five co-defendants not guilty of conspiring to prevent federal employees from doing their jobs through intimidation, threat or force during the 41-day occupation of the Malheur National Wildlife Refuge.

The Bundy brothers and occupiers Jeff Banta and David Fry also were found not guilty of having guns in a federal facility. Kenneth Medenbach was found not guilty of stealing government property, and a hung jury was declared on Ryan Bundy’s charge of theft of FBI surveillance cameras.

The jury didn’t have to deliberate for long:

The jury of nine women and three men returned the verdicts after five hours of deliberations on Thursday in the high-profile case that riveted the state and drew national and international attention to the federal bird sanctuary in rural eastern Oregon.

The defendants and their legal teams were naturally thrilled and relieved.  But the real drama started when Ammon Bundy lawyer Marcus Mumford asked for documentation on a pending case against Bundy in Nevada, for which a detainer would give the feds a reason to keep him in custody.

The coda to the stunning verdict, undoubtedly a significant blow to federal prosecutors, was when Ammon Bundy’s lawyer Marcus Mumford argued that his client, dressed in a gray suit and white dress shirt, should be allowed to walk out of the court, a free man.

U.S. District Judge Anna J. Brown told him that there was a U.S. Marshal’s hold on him from a pending federal indictment in Nevada.

“If there’s a detainer, show me,” Mumford stood, arguing before the judge.

Suddenly, a group of about six U.S. Marshals surrounded Mumford at his defense table. The judge directed them to move back but moments later, the marshals  grabbed on to him.

“What are you doing?” Mumford yelled, as he struggled and was taken down to the floor.

As deputy marshals yelled, “Stop resisting,” the judge demanded, “Everybody out of the courtroom now!”

Mumford was taken into custody, a member of his legal team confirmed.

Ammon Bundy’s lawyer J. Morgan Philpot, said afterwards on the courthouse steps that Mumford had been arrested and marshals had used a stun gun, or Taser, on his back. Another member of Ammon Bundy’s legal team Rick Koerber, echoed Philpot, saying he heard Mumford questioning in court why they were using a Taser against him.

Philpot decried the marshals’ treatment of Mumford in the courtroom. “What happened at the end is symbolic of the improper use of force by the federal government,” he said.

By 6:30 p.m., Mumford was released from custody. He confirmed that he was struck with a stun gun once while he was on the floor of the courtroom.

I would say this is unreal, except that things like this are happening far too often now.

Mumford was merely doing what a good lawyer would do, arguing zealously for his client.  There is no reason why he should have remained silent.  Demanding a detainer document, if Bundy was not to be released, is exactly what any defense attorney should have done in the situation.

The Oregon-standoff situation has been full of such unjustified high-handedness by the federal government from the beginning, and this latest event just raises the red flags again.  Americans should be very alarmed at what our federal government feels entitled to do now, including federal officers disobeying a judge in her courtroom in order to manufacture an “incident” out of nothing.

Don’t assume that word of what actually happened will get out through the MSM.  Here is how the New York Times reported the marshals’ rugby scrum against Mumford:

In a sign of the tension that ran through the trial, Ammon Bundy’s lawyer, Marcus R. Mumford, frustrated that the Bundys were not being released, was restrained by four United States marshals after an outburst.

This makes it sound as if the marshals were acting under the judge’s order, when in fact — according to the Oregonian account — she told them to back off after they converged on Mumford.

One of these accounts is, essentially, a lie.  I know which one my money is on.  We no longer live in a world in which MSM outlets can be assumed to be acting in good faith.

But it’s up to us whether we have such a world again. 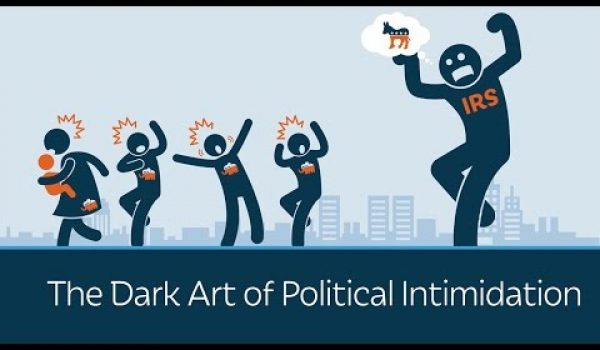 Video: Prager U on the dark art of political intimidation
Next Post
The Clintons’ original email scandal: One million lost emails in re Monica and Filegate