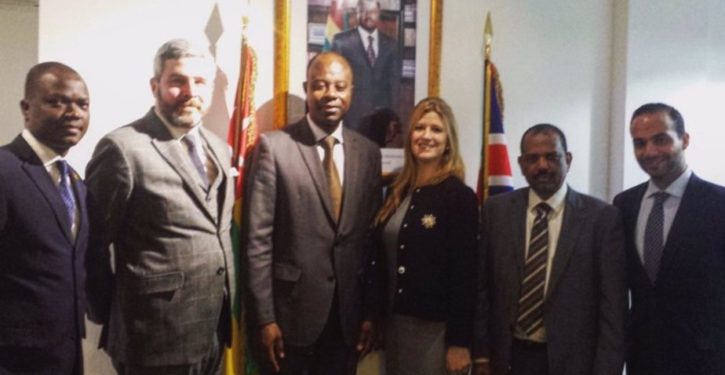 A delegation from LCILP visits Link Campus in Rome in 2016. George Papadopoulos is on the far right, next to LCILP director Nagi Idris. (Twitter image, Rebecca Peters, via Medium, Brian Whitaker)

Some of the emails that have come to the public’s attention via WikiLeaks are out-and-out bombshells, while other chains are so fragmented and enigmatic that an understanding of what they portend requires reconstruction and some guesswork.

One that fits the latter category centers on an exchange between Clinton Campaign Chairman John Podesta and Neera Tanden, of the hard-left Center for American Progress, concerning an apparent leak that needed — shall we say? — plugging?

Ron Fournier is a writer for National Journal. The highlighted link in the email takes you to an article at National Journal with the intriguing title “Emails May Be a Key to Addressing ‘Pay-to-Play’ Whispers at Clinton Foundation.” The article is protected by a pay wall which prevents me from providing more information, but I can tell you the subhead: “There are not two Clinton controversies. There is one big, hairy deal.”

Eric Braverman, the name Podesta throws out as the likely mole, is a former CEO of the Clinton Foundation.

Trump campaign adviser Roger Stone has posted a tweet in reaction partly to this exchange in which he advances the claim that Braverman was working with WikiLeaks and now fears assassination by the Clinton machine:

How ironic that Braverman, according to the scuttlebutt, is seeking asylum from Russia, of all nations!