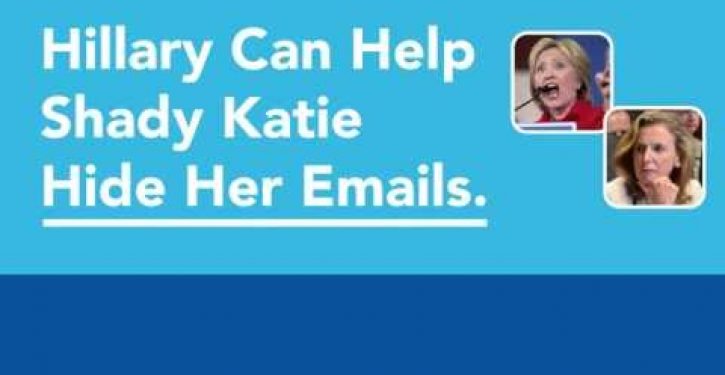 Disgraced former New York Rep. Anthony Weiner made a cameo this week in an attack ad on Pennsylvania Democratic Senate hopeful Katie McGinty, as part of a 44-digital spot released by the Associated Builders and Contractors, a national trade association.

The ad slams McGinty for her refusal to hand over six months of emails and work schedules during her time as Gov. Tom Wolf’s chief of staff requested by the state’s Republican party.

The video shows a hypothetical text-message conversation between the candidate and Democratic presidential nominee Hillary Clinton, asking the former secretary of state for advice on destroying emails. Weiner, who has been the center of a number of sexting scandals and is under investigation for corresponding in lewd conversations with a minor, then joins the chat, saying he could use some advice on the matter.

“Hey ladies! I heard you’re good at keeping phone stuff secret. Could use some tips. DM me,” the text reads, followed by the group encouraging voters to: “Delete Shady Katie and politics as usual. Vote Pat Toomey.”

The ad is part of a $110,000 effort to keep McGinty out of office in the Keystone State.

The association has put forth a $3 million digital ad buy to help Republicans hold the majority in the upper chamber.

The battle for the Senate has narrowed to these 6 states
Next Post
Bridge too far? County in Mississippi will issue fines to anyone dressed like a clown