Who said this guy was boring? Tim Kaine, if he does become vice president (God forbid!), will provide every bit as much facepalm-inducing comic relief as Joe Biden, though he will do so in a manner that will delight social justice warriors everywhere.

In his first question out of the gate at last night’s vice presidential debate, Kaine was asked what strengths he brings to the Democratic ticket that would make him a viable stand-in in the event he had to step in and fill the president’s shoes. (Hard to imagine a circumstance where that might be necessary — ahem!):

Nevertheles, Kaine’s answer consisted of a crap-ton of baroque gibberish about a strong woman (ahem!) that ended with the assurance that he was happy to serve as Hillary Clinton’s right hand “person.”

Person? How very, utterly, delightfully P.C. of him! Instead of “Stronger Together” — Clinton’s puzzling campaign slogan (which Kaine used in his remarks) — Team Clinton should consider the much more accurate “Strong Woman and Her Right Hand Person.”

Needless to say, the Twittersphere lit up this morning with reactions, most of them at Kaine’s expense:

He is already gender effacing. I will be Hillary Clinton's right hand "person" — not man!

#VPDebate is what it looks like when a conservative debates with a liberal progressive. Pence calmly destroyed Hillary's right hand "person"

@timkaine : I am Hillarys right hand "person", this guy ceedes his manhood in quest for power! # loser , #tcot #WakeUpAmerica @BlissTabitha

Moving into a world of gender neutrality, Kaine says he will be HRC's "right hand person."

As the Washington Examiner notes, there are a few positive tweets from clueless liberals:

Tim Kaine referred to himself as Hillary's "right hand person" and my little feminist heart is exploding with joy! #VPDebate 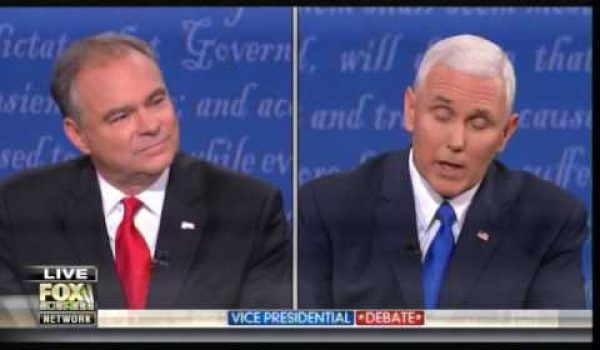