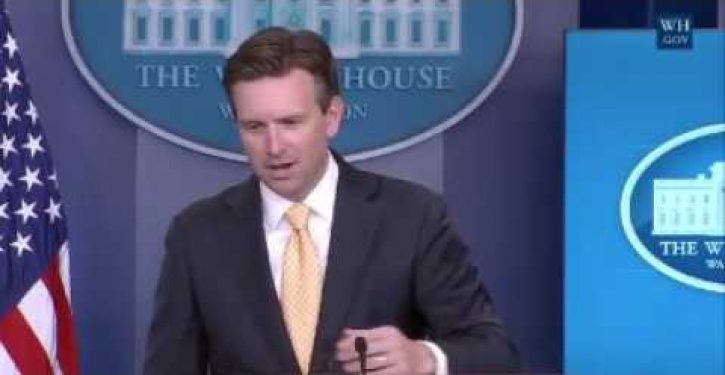 Last Oct. 15, I raised this “iconic” Watergate-themed question in a piece headlined: “What does Obama know about the Clinton scandals, and when did he know it?”

Subsequently, over the last year, as more Clinton corruption and scandals have come to light, Obama remains largely untouched, floating above the fray.

How is it that Obama has not been connected to or tarnished by Clinton’s various scandals?

Why doesn’t Obama bear any blame for his Justice Department’s controversial decision not to indict his former secretary of State?

Was Obama blind to the millions of foreign government donations pouring into the Clinton Foundation that violated the ethics agreement Clinton signed upon agreeing to serve as his secretary of State?

Why isn’t Obama a central figure in all the email and foundation scandals when President Obama was Clinton’s direct supervisor in the most important cabinet seat?

Was Obama a Clinton enabler?

Since Obama enthusiastically endorsed Clinton, expects her to continue his “legacy,” and now begins battleground state campaigning to prop up her sagging campaign, why is Obama immune from the stink of her scandal?

In normal political scandal contagion, Obama would be infected because the big boss usually takes the fall, accepts responsibility for the actions of his underlings and/or is personally blamed for not minding the store.

Instead, Obama resembles a new industrial-grade Teflon enjoying a historically impressive late-term job approval rating of 50.9%. Meanwhile, both Clinton and Trump’s unfavorable ratings have landed them in the dumpster, tied at around 60%.

Now, eight weeks before Election Day, is Obama going to get a complete pass from the media and voters while he acts as Clinton’s most influential campaign surrogate largely at taxpayer expense?

It sure looks that way, even as it becomes clear that his Justice Department had grounds to prosecute Hillary for destroying government records and jeopardizing national security. Moreover, Obama’s Treasury Department deliberately chose not to unleash the IRS on the Clinton Foundation even though other charities, both large and small have been audited, fined, or forced to close for far less wrongdoing.

However, there is still a small chance that Clinton’s scandals will significantly tarnish Obama’s legacy. This chance stems from the consequences of a great unresolved mystery that I raised in my October 2015 piece:

“There is hard evidence that as early as 2009 the Obama administration knew about Mrs. Clinton’s use of a private email server. Obama did not pull the plug. Surely, the president’s intelligence advisers warned him that an unsecured home-based server posed a national-security risk.”

Here is a related question that I always found troubling: Since President Obama NEVER received an email from a Clinton “state.gov” address during the four years that Hillary Clinton served as his Secretary of State, did Obama ever raise concerns with his White House staff about Clinton’s use of a private email server?

Now, layer that question upon a State Department briefing that took place on Jan. 29, 2016. Spokesman John Kirby announced that the State Department would not release 18 emails found on Secretary Clinton’s private server that were exchanged between President Obama and Clinton while she was Secretary of State.

Kirby added that “in accordance with the Presidential Records Act they will ultimately be released.” Apparently, none of the emails were classified, if Kirby is to be believed.

But, according to the transcript, several reporters were incredulous upon hearing that only 18 emails were found. Here is a sample from the transcript:

QUESTION: Does that mean that they only emailed each other 18 times for the four years that she was his Secretary of State?

QUESTION: That’s 48 months. I mean, is that – have you gone through all of them and she only communicated with the President 18 times by email?

KIRBY: Of the 55,000 pages of traffic that were handed over by former Secretary Clinton to us to go through for release through FOIA, we have found these 18.

KIRBY: And I do not expect that there will be more.

QUESTION: Well, that’s – does that strike you as being a bit unusual? I mean, my boss – I have 18 emails an hour with her sometimes.

Warning: Now is when I look through a lens of pure speculation based on an impending news event.

Any day now Wikileaks is expected to release “significant” emails” from Mrs. Clinton’s tenure as secretary of State, the Clinton Foundation, and the Clinton campaign. More interesting, are reports that Wikileaks founder Julian Assange has possession of Clinton’s 30,000 deleted emails.

If true, is it reasonable to surmise that more emails exchanged between Clinton and President Obama are likely to surface? Perhaps even some with classified material?

That will be a “game-changing” moment. Not only will Obama be implicated directly into the web of Clinton’s scandals but the President himself could be accused of national security violations. Then, all bets are off about what could be revealed, unraveled, or if there are any hints of secret deals between the Clintons and Obama.

Surely then, Obama’s presidential legacy would be permanently tarnished, and his endorsement of Clinton considered suspect.

Meanwhile, Obama chugs along untouched, flying high with a 50% job approval — at least for now.

*UPDATE* This just in via Weasel Zippers. At yesterday’s daily press briefing a White House reporter asked whether Hillary Clinton would destroy Obama’s legacy if elected. The answer:

Hillary’s doctor reveals candidate had another secret medical treatment in January
Next Post
U.S. among most depressed countries in the world