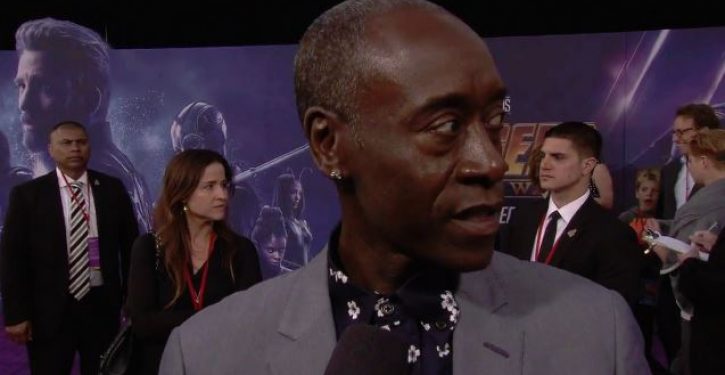 Here we are once again, learning how to conduct ourselves civilly and carry on constructive political discourse. This time the teacher is filmmaker, actor, author, and sometime activist Don Cheadle.

Before we get to Cheadle’s lesson in civility, some background is in order. Early last Friday, Nykea Aldridge, cousin of NBA star Dwyane [sic] Wade,  was shot to death as she pushed a baby stroller through Chicago’s Parkway Gardens neighborhood. Aldridge was not the intended target of her killer. It appears she had inadvertently wandered into a gun battle in progress — hardly a rare occurrence in what has become America’s most violent city.

After the news had broken, GOP presidenti nominee Trump tweeted:

Dwyane Wade's cousin was just shot and killed walking her baby in Chicago. Just what I have been saying. African-Americans will VOTE TRUMP!

Trump was immediately excoriated by the left for what Slate’s Matthew Dessem (to name one writer) calls his “wildly offensive response to the death of” Aldridge. A few paragraphs later Dessem added that Trump sounded “unusually sociopathic even for the avatar of the Republican Party’s white nationalist base.”

I will concede that the timing of Trump’s tweet was insensitive. It went up within hours of the news report. But “sociopathic”?

That’s not the only criticism that was leveled at Trump. Another Slate author, Daniel Politi, posted earlier that “Trump did not offer any explanation as to why the shooting illustrates just what he had ‘been saying.” Politi then answers his own question:

Presumably … he was referring to a speech he gave earlier this week in which he used a law-and-order argument as part of his latest push to try to win over minority voters. ‘I say this to the African-American community. Give Donald Trump a chance! We will turn it around!’ he said. ‘We will make your streets safe so when you walk down the street, you don’t get shot, which is happening now. That’s what’s happening now.’

We finally get to Don Cheadle’s lesson in civility, which took the form of a tweet:

A few minutes later, he added a followup tweet:

It’s instructive to recall how in 2011 Paul Krugman of the New York Times blamed overheated conservative rhetoric for the massacre in Tucson that ended the political career of Gabrielle Giffords and the lives of six others. Of course, none of the accusations by Krugman or his fellow lefties turned out to hold water. The shooter, Jared Lee Loughner, turned out to be a registered Independent who, according to a high-school friend “did not watch TV; he disliked the news; he didn’t listen to political radio; he didn’t take sides; he wasn’t on the Left; he wasn’t on the Right.”

But where is Krugman now to set Don Cheadle straight, not to mention the authors at Slate? In one of his 2011 musings on Tuscon, Krugman recalled “the upsurge in political hatred after Bill Clinton’s election in 1992,” which he claimed had “culminated in the Oklahoma City bombing.”

Shouldn’t be urging his pals on the left to cool their heels?

The real ‘we only tip citizens’ story is complicated, and virtually every media outlet got it wrong
Next Post
The entire ‘LGBT’ narrative just crumbled