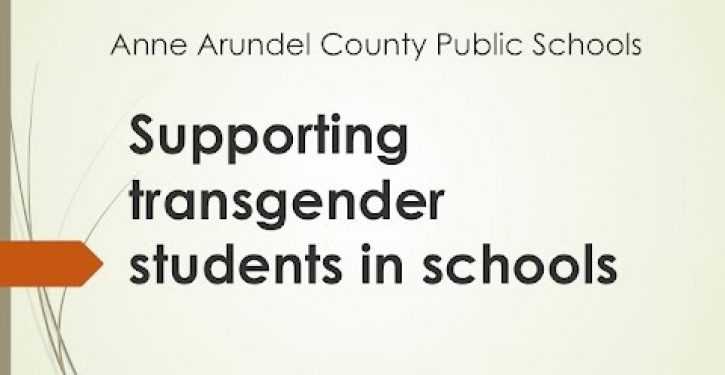 The idea that boys who think (or say they think) they are girls should be allowed to bunk with real (biological) girls without parents’ knowledge is insane, especially coming at a time when some schools are sending home permission slips that need to be signed before students can recite the Pledge of Allegiance.

And especially from a school district in Maryland. This is the blue state in which one school punished a student for refusing to recite the shahada, the Islamic statement of faith. The state in which a student was suspended for chewing a toaster pastry in a manner that, to some, made it look like a gun.

These and other lunatical edicts were justified under the umbrella term zero tolerance. But when it comes to sleeping arrangements, the Anne Arundel County school district is not only willing to tolerate allowing teens with male plumbing to bed down with teens without. It is willing to do so behind the backs of parents who are so mired in the dark ages that they might raise objections.

Rod Dreher of The American Conservative obtained a copy of the video, which follows. The money portion, which addresses the field trip issue, begins at around 28:00. A transcript of Mosier’s comments appear below.

Many of you might be asking yourselves, so I’m at an overnight field trip, and I have a student who is biologically a male, identifies as a female, and we’ve worked with that student and her [sic] family, and that students wants to sleep in the dorms or — whatever sleeping arrangements are — with the females. They don’t want to sleep by themselves, they want to sleep with the rest of the females. So what do we do? The answer is, they sleep with the females. That’s not the easy answer; it’s the right answer.

Mosier goes on to explain that “in some cases, it’s going to cause issues because” privacy rules don’t “allow you to share that with parents of all of the other campers.”

How convenient! The district sets up its own ad hoc by-laws governing the privacy rights of individual students, then declares that its hands are tied when it comes to involving parents in a decision they have every right to be involved in.

What makes all of this even more noxious is a new study referenced in a post by Joe Newby that challenges the entire scientific basis for the belief that transgenderism as something other than deviant behavior. The monograph, by Lawrence S. Mayer and Paul R. McHugh, is scrupulously researched and documented. It is precisely the sort of empirical work that liberals claim to value … at least when it comes to global warming.

University warns students that failing to use preferred gender pronoun is violation of federal law
Next Post
AP bombshell: Over half of non-govermment people with access to Clinton at State Dept. were Foundation donors