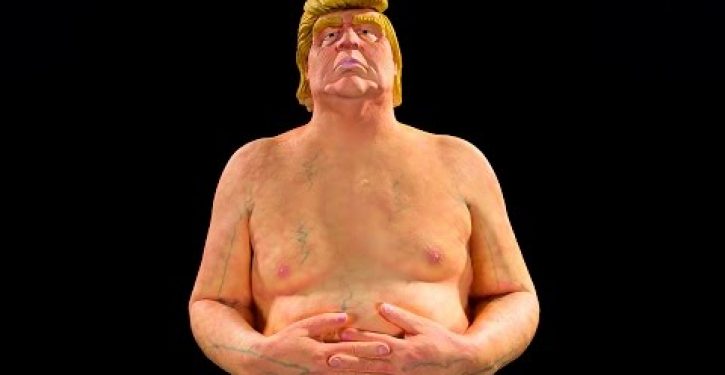 First a word of explanation is in order. The words “anatomically correct” in the title are set off by quotes to suggest that while the statue includes genitalia, their proportion relative to other body parts does not likely comport with reality — and certainly not with the Donald’s intimations about the size of his “package.”

This is not the first nude portrayal of Trump, nor is Trump the only major-party candidate immortalized in a less-than-fully-clothed state. A larger-than-life, and somewhat flattering, mural of Hillary Clinton clad in a skimpy bikini appeared in Australia in late July and caused quite the stir.

Today’s unveiling is, however, the first nude depiction of either candidate displayed in the U.S., and voters with a hankering to pose alongside a nekkid statue of the Republican nominee can do so free of charge in New York City’s Union Square Park.

The full-frontal sculpture of the Republican presidential candidate features realistic details, such as a mop of orange combed-over hair, flesh-colored skin, veins and a protruding belly. It also leaves no physical feature to the imagination.

An engraved plaque at the base of the statue reads “The Emperor Has No Balls,” and is signed by “Ginger.”

A video of the creation of this and other nude sculptures of Trump posted on YouTube by the artist is reproduced below (warning: nudity):