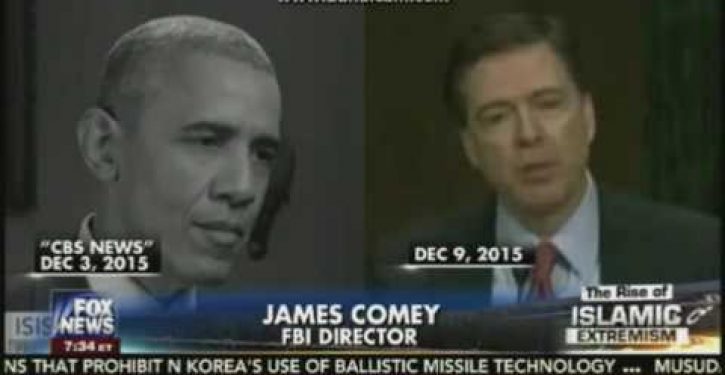 In the latest iteration, Trump said something even Obama’s biggest enemies in conservative media would not have said, at least not in those exact terms. Emphasis added:

After lamenting the “mistake” the US made by going to war in Iraq — a conflict he repeatedly says that he opposed, despite evidence to the contrary — Trump then criticized Obama’s attempts to “clean up.”

“Normally you want to clean up; he made a bigger mess out of it. He made such a mess. And then you had Hillary with Libya, so sad,” Trump said.

He then said that the “co-founder” of ISIS was Clinton.

Critics of Obama’s policies have long argued that those policies (pulling out of Iraq, arming rebel groups in Syria with little vetting) allowed ISIS to form and flourish.  But critics who think of themselves as serious and responsible haven’t called Obama the founder of ISIS.

The responsible critics also haven’t made any headway in gaining public traction for their concerns.  The leftosphere – including the MSM – has succeeded in obfuscating the whole question by burying it in a specious comparison of “Obama’s blame” with “Bush’s blame.”

This debate tactic ignores the defining fact about ISIS’s rise, which is that its main impetus was not the breakdown of security in Iraq, but the chaos from the Arab Spring, especially (although not only) in Syria.  Everything was different, and uniquely Obama’s problem, after the first half of 2011.  Bush’s arrangements from 2008 or before were not the governing factor in anything at that point.

But responsible critics were never able to get their points made above the general noise level.  Trump, by making an outrageously-worded statement, has brought the issue front and center.  Now everyone is talking about Trump saying “Obama founded ISIS.”

And Trump’s not walking it back this time.  Talking on Hugh Hewitt’s radio program on Thursday, 11 August, Trump doubled down (tripled down?) on the proposition:

Trump was asked by host Hugh Hewitt about the comments Trump made Wednesday night in Florida, and Hewitt said he understood Trump to mean “that he (Obama) created the vacuum, he lost the peace.”

Hewitt pushed back again, saying that Obama is “not sympathetic” to ISIS and “hates” and is “trying to kill them.”

“I don’t care,” Trump said, according to a show transcript. “He was the founder. His, the way he got out of Iraq was that that was the founding of ISIS, okay?”

Now, there isn’t anything Trump has said in these passages that I would put in the words he uses.  I don’t think the advisor whose hand I detect here would put it in those words either.  The advisor is retired Army Lt. Gen. Michael Flynn, the former director of Defense Intelligence who in 2015 said that the Obama administration willfully ignored the predicted consequences of arming the groups that ultimately became ISIS.

The administration was warned as early as 2012, Flynn pointed out last year, but made a “willful” decision to ignore the warnings.  (See here for a very good extended treatment, one with echoes of intelligence insider-dom that resonate as valid with me.)

The point here is not that that’s different from saying that Obama literally founded ISIS.  I assume y’all folks are smart enough to get that.

The point is that Trump has succeeded, where no one else could have, in making this a major topic of public conversation this week.  Everywhere you look, the words “Obama founded ISIS” are being blasted in the headlines.  Madison Avenue should function so effectively.

The MSM are doggedly railing against Trump for saying it.  And most of the right is distancing itself – as with Hugh Hewitt – from the wrongly-couched assertion.  (LU contributor and colleague Jeff Dunetz also points out that the MSM coverage of this Trump-truth incident has been “psychotically literal,” which in an important sense is true.  But I think the MSM do their cause more harm than good by trying to frame Trump as the crazy one.  We really are watching the childhood rhyme come to life this year: Trump is rubber, the MSM’s glue.)

Just at this time, along comes a related development: the report from Congress that it does look, as alleged last year, like senior officials at CENTCOM “cooked” the CENTCOM intelligence reports on how well the counter-effort against ISIS was going.

The initial allegation about that was made public 11 months ago.  A large group of 50 analysts working at CENTCOM headquarters in Tampa filed a complaint that they were being pressured to make assessments rosier than the facts warranted.  They said their work was being edited to present a falsely positive picture of how things were going in the fight against ISIS.

There was at least one major data point at the time that suggested complicity at the highest levels of the Obama administration in this alleged intel-cooking.  The director of intelligence (J2) at CENTCOM, Army Maj. Gen. Steven Grove, reportedly spoke nearly every day with James Clapper, the director of national intelligence.

As the Guardian’s “former intelligence” source says, that is indeed “highly, highly unusual.”  Normally, the CENTCOM J2 doesn’t speak directly with the director of national intelligence.  The J2 has a circuit of daily contacts with the intelligence community, but they don’t include the DNI – who functions at a nosebleed level far above the CENTCOM J2’s paygrade.  Any work-related discussion with the DNI is inherently about national policy, and there are three layers of command and/or policy authority that would ordinarily sequester the CENTCOM J2 from the DNI: his own boss, the CENTCOM commander; the Joint Staff at the Pentagon (which has its own J2 and intelligence staff); and the Office of the Secretary of Defense.  Only the latter is the equivalent in decision-making seniority to the DNI.

If General Grove was talking every day to James Clapper, something very unusual was going on.  (General Lloyd Austin, the CENTCOM commander at the time, quite probably knew about these discussions.  As widely as they seem to have been known in the J2 directorate, it would have been impossible for Austin to be unaware of them.  Presumably they had his approval, spoken or otherwise.)

Now a House task force, after an investigation that included dozens of interviews with these analysts (at which CENTCOM always had a command representative present), has concluded that “structural and management” conditions at CENTCOM yielded intelligence products that were “significantly more optimistic than that of other parts of the Intelligence Community (IC) and typically more optimistic than actual events warranted.”

Based on its own investigation, the Joint Task Force has substantiated that structural and management changes made at the CENTCOM Intelligence Directorate starting in mid-2014 resulted in the production and dissemination of intelligence products that were inconsistent with the judgments of many senior, career analysts at CENTCOM. These products were consistently more optimistic regarding the conduct of U.S. military action than that of the senior analysts. Based on specific case studies evaluated by the Joint Task Force, during the time period evaluated by the Joint Task Force, CENTCOM produced intelligence that was also significantly more optimistic than that of other parts of the Intelligence Community (IC) and typically more optimistic than actual events warranted. Additionally, many CENTCOM press releases, public statements, and congressional testimonies were also significantly more positive than actual events.

The timeline of bad news versus cover-up

The sequence of events is, thus, that in 2012, the Obama administration was warned about what would happen if it continued to arm and encourage the groups that became ISIS (and Al-Nusra, which remained directly affiliated with Al-Qaeda).  (The administration was even warned very precisely about where ISIS would make its headquarters and capital in eastern Syria.  See the links above on General Flynn’s public comments in 2015.)

What was predicted did happen: ISIS began its career of exceptionally bloody and grotesque territorial conquest, pushing out from a redoubt in eastern Syria.  The acquisition of territory accelerated rapidly in the spring and summer of 2014.

And in mid-2014, the CENTCOM intelligence directorate made “structural and management changes…[that] resulted in the production and dissemination of intelligence products that were” all of the following:

“…inconsistent with the judgments of many senior, career analysts at CENTCOM.”

“…consistently more optimistic regarding the conduct of U.S. military action than that of the senior analysts.”

This amounts to spinning intel to make the counter-ISIS effort look more effective than it was.  Interestingly enough, that implication fits with this presentation by Fox of the ways in which Obama has painted the counter-ISIS picture more rosily (to the point of outright falsehood) than his senior officials.  He has been directly contradicted by his senior officials on a number of occasions.

The “Trump truth” may not fit the exact words Trump uses to say something.  But it seems to take over the media’s own precincts and make a hash of their narrative, paving the way for a truth to come out that the American public would not otherwise have seen.

It’s at work again with the “Obama founded ISIS” theme.  It sure looks like somebody tried to cover up Obama’s complicity — advertent or otherwise — in fostering the development and growth of ISIS.  Without Trump’s “Obama founded ISIS” statement, that set of facts would have been buried in the noise.

Fugitives from the law are living on your dime, and committing rapes and murders to boot
Next Post
France appeals to citizens: Let refugees into your homes