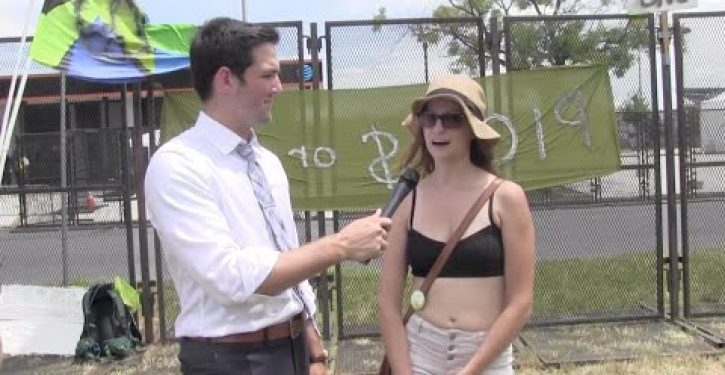 How do you quell the anger of disaffected loyalists? You don’t evidently. Just ask socialist guru and former presidential hopeful [score]Bernie Sanders[/score]. Ever since betraying his base by first declaring — correctly, it turns out — that the Democratic Party was rigged against him, then doing a 180 and pledging his support for Hillary Clinton, Sanders has been working desperately to put the genie back in the bottle.

One strategy he tried at the Democratic National Convention last week was to implore his erstwhile backers to imagine a President Trump. Many took his advice. And how Donald Trump is their man.

Bernie supporters, emboldened by the recent DNC email leak, took to the streets in Philadelphia to voice their displeasure with Hillary and the Democrat party as a whole.

With chants of “Hell no DNC, we won’t vote for Hillary” and “Lock her up,” the protesters made it clear they would not be casting their votes for Hillary Clinton. But who would they be voting for instead?

Problems and solutions: Reparations website invites white libs to assuage their guilt
Next Post
Daily Beast asks, ‘What are the chances Hillary can live up to Obama’s scandal-free example?’