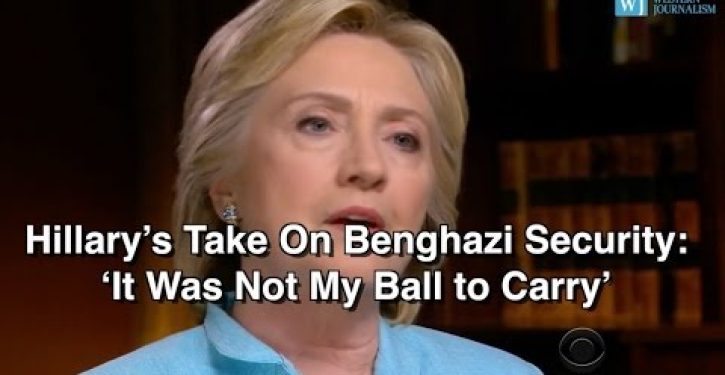 Hillary Clinton’s response to questioning by Scott Pelley of 60 Minutes, in an interview that aired on Sunday 24 July, probably doesn’t need much commentary.

In the segment, Pelley asked her about Benghazi, and her responsibility for the security failures there in September 2012.  Hillary’s bottom line for everything was a practiced, plausible-sounding deflection: basically, there were investigations, and hundreds of pages of reporting on them, and nothing was her fault.

This doesn’t comport with her own claim only seconds before that she “took responsibility” for the debacle in Benghazi.  And Pelley let her get away with that: with making the heroic pronouncement about taking responsibility, but then shedding any actual accountability.

But Pelley’s not running for president.  Hillary Clinton is.  Here’s the key passage from the interview (my transcript):

Hillary Clinton: Distinguished Americans, military and civilian experts, they came out, and they said, you know, “The ball was dropped in security,” and, you know, uh, some of the decisions that were made probably should have been rethought –

Scott Pelley: But wasn’t that your ball to carry?

Clinton: No.  It wasn’t.  It was not my ball to carry.  It was very – eh – read the, read the reports, read all of the reports, all many hundreds of pages of them, including this latest one, which was a political exercise from the very beginning.

Uh, those [department communications on security concerns] never reached me, those never came to my attention –

Pelley: The concerns about the security never came to your attention.

Clinton: No!  The experts…we have security experts.  I am not going to substitute my judgment for people who have been in the field, who understand what our men and women are up against.  So, this has all been investigated, over and over again, but as Tim [Kaine] was just saying, it didn’t get the result that some of the Republicans wanted, so they kept at it, and I feel very sorry that they have politicized it unlike any prior example, and I just think the most important challenge we face is learning from it and doing everything we can to keep our people safe.

In the middle of that passage lie the words a commander-in-chief can never say:

It was not my ball to carry.

When you’re the commander-in-chief, and your people are deployed in harm’s way, it is your ball to carry.  Full stop.  No excuses.

If you’ve been in the military, you know that the way you get more responsibility is by showing that you understand accountability.  That’s a Leadership 101 lesson Hillary has clearly never learned.  For that reason alone, we don’t want her in command of our armed forces, or any other element of American power.

But there’s something else to take away from this interview, and that’s the gigantic missing element in the whole Benghazi debacle.  Hillary brings the comparison on herself by invoking the terrorist attack in Beirut in 1983, in which 241 U.S. Marines were killed (along with 58 French servicemen).

Yes, let’s consider the attack in Beirut, and its aftermath.  Even though the situation was somewhat different – the Marines were deployed overtly, for a recognized military mission, under the American flag – the secretary of state was the cabinet official who promptly took ownership of the problem and led the immediate effort to fix it.  Without waiting for lengthy investigations or blame-shifting exercises, George Shultz flew to Europe to confer with America’s partners in the peacekeeping mission, review its premises, and decide what needed to be changed across the board.  That review included, but was not limited to, the security arrangements and rules of engagement for the peacekeeping units.

How do we know that?  Because of the gigantic thing that’s been missing from the beginning in the Benghazi debacle: an accounting to the American people from the president.

Here’s the thing about the accounting provided by President Ronald Reagan, in the first 14 minutes of the video below.  It’s about why our Marines were there; what our policy was and why we had it; what the Marines’ mission was; what they had accomplished; what was still left to accomplish; and what the Reagan administration was doing to ensure the mission would be completed, while our Marines would not be so vulnerable again.

Reagan certainly blamed the terrorists for the attack, if you want to put it that way.  But more importantly, he emphasized the meaning of what the Marines were doing for U.S. national security.

The point here is not that no one could disagree with the Reagan policy.  A lot of folks did.  (And there were real problems with the Marines’ vulnerable force-protection posture in Beirut – problems that were the subject of study and lessons learned for the next two decades.)

The point is that Reagan laid his policy out in an accountable manner for the people, making clear that his starting point wasn’t an effort to affix blame – or avoid it – but to do right for America.

Americans have forgotten that that’s what we used to expect from our presidents.  The policy silence from Obama – and Hillary – on what we were even doing in Benghazi is the loudest aspect of this whole matter.

Instead of an affirmation that we had a purpose driven by our interests, we’ve gotten excuses about how an idiotic, “awful” video led to four deaths – excuses that serve nothing but the terrorists’ own narrative.

There’s more on the line here than the security of the special mission compound in Benghazi.  The ball Hillary and Obama couldn’t carry is the ball of being Americans: with freedom of thought and speech, and our own sovereign purposes in the face of a determined enemy.  Affirming that it’s wrong, period, for anyone to attack us just for that reason – that’s the ball they didn’t carry.  Not once has any member of the Obama administration stood up for our purpose in Benghazi.  Indeed, years of effort have failed to pry out of anyone exactly what it was.

Maybe the American people would have disagreed with the purpose, as many did with Reagan on Beirut.  But Obama never faced up to that most fundamental aspect of the whole situation.  Neither did Hillary.  Instead, we’ve been treated to lies, defensive whining, and silence.

It’s a terrible thing for a people, when national “leadership” becomes all about chasing blame around the public square.  Hillary as president would unquestionably give us four more years of it.