The size of the crisis the modern West finds itself in cannot be overstated.  Human reason itself seems to be melting down.  The god we have made of modern government seems to flicker in and out of phase before us, telling us nothing but lies, and urging us to believe and profess things that are insane.

Let me say at the outset that you must take heart from the fact that you can still see this.  You haven’t lost your mind.  And that matters.

But Western governments have lost their minds, in a collective and most remarkable sense.  In some parts of the world, there is still a feral strain of common sense holding governments together – not a high-order moral imperative, perhaps, but an instinct for reality and survival.  That instinct is bizarrely, surreally lacking, however, in the halls of government in much of the West.

We could pick a lot of examples, but some of the most astounding have to do with governmental evaluation of the damage done, and the threat posed, by Islamic extremists in Europe.  It is truly incredible to uncover the bad faith Europe’s public officials have shown in recent months.  And America’s current crop of public officials – and media – are not far behind, in either their posture toward Islamic extremism, or their determination in general to lie about threats and make them fit political narratives.

The first specimen here is the reason for this particular post.  We learned on Friday, 15 July, that after the November 2015 attacks in Paris, which included the horrendous siege of the Bataclan concert hall, French authorities suppressed all mention of the gruesome tortures to which the attackers subjected many of their victims.

I’ll let you decide how much you want to know about them.  The information is at the link.  Just know that, after the attack, one of the first investigators on scene – apparently a man – staggered out in tears and vomited in the street, so overcome was he by the hideous nature of what he saw.

An inquiry in the French National Assembly recently brought the facts to light, including reports from survivors that the Islamist attackers were using phones to record their grotesque actions.  In spite of that tip, and a massive pile of forensic evidence, French authorities had not pursued the phone-video lead or reported the evidence, but instead had covered it all up for months.  Families were not even allowed to see the bodies of their dead.

Under questioning from members of the Assembly, law enforcement authorities said lamely that the reports of atrocities were “rumors.”  They excused their failure to identify the atrocities for what they were, by saying – yes, they really said this – that they had found no knife at the scene, and therefore couldn’t conclude, among other things, that body parts literally cut off of people and stuffed in their mouths had been severed, as opposed to perhaps being “blown off by shrapnel.”

It would be one thing to stonewall the public on this.  It’s another to make up apologetic narratives that let the attackers off the hook, and offer those exculpatory narratives, no matter how ridiculous they are, as if they’re a serious alternative to the truth.

Yet the French are only the latest to be caught doing this.  After the widespread “sex attacks” on women at a New Year’s Eve celebration in Cologne, Germany, it was like pulling teeth to pry out of the authorities the truth that the attacks affected more than a handful of women.  The authorities eventually acknowledged that the victims numbered in the dozens.  It wasn’t until just this week that we found out – through a leak, mind you – that the number of New Year’s Eve victims was more like 1,200, in cities across Germany. Virtually all of the suspects were Muslim migrants.

There can be no excuse for pretending that this widespread pattern of attacks didn’t happen.  That’s what the government is doing by refusing to tell the truth about it.  Another word for it is lying.

The tortured illogic of the official posture is at work among some of the people as well, it turns out.  A victim who initially reported that she had been raped by native Germans as well as migrants later told the truth – clearly not under any pressure from the authorities – and admitted that her attackers were all migrants.  But she then issued a blanket apology on Facebook to male migrants, for any “racism” they might experience because she had come clean.

She had wanted to bury their real crimes among false crimes alleged against German men, in order to avoid inciting anyone to racism.  Truth meant nothing; it was a psychotic narrative about “racism” that had to be served.

Perhaps no one has gone as far in the direction of making up excuses for the perpetrators as Sweden has.  Rape and sexual assault by migrants have been rampant there in recent years, with police sources telling the media that the increase over the last year has been dramatic, driven by the migrant crisis.

A Swedish feminist politician recently declared that rape is worse when Western men do it.  Migrants are to be excused for it, since after all they come from a different culture.

When signs began appearing recently in a Swedish town, reading “Women who don’t wear a headscarf are asking to be raped,” local police swore they couldn’t imagine who was behind it.

This, as Breitbart’s Donna Rachel Edmunds implies, may be because there’s also the narrative that migrants are being set up to take a fall by evil conspiracies.  That was the theory advanced by apologists in Britain, after a threat was posted by Muslim extremists against the local dogs.  It must be a false-flag operation by British “nationalists.”

Nothing about the narratives offered by the apologists makes sense.  The common threads, however, are easy to identify.  One, the truth is dismissed or suppressed.  And two, excuses are made, and alternative narratives are introduced – and always to exculpate the perpetrators and the perpetrators’ religion.

In fact, never in the history of man have so many supposedly secularist, empiricist people been so bizarrely convinced – at least according to their own confession – that one particular religion is a religion of peace, and that its honor must be defended.

In their ideology, you don’t even have to say negative things, per se, about Islam, to be condemned.  You’re accused of “racism” and “Islamophobia” merely for not joining in the affirmative chorus.

It’s not just that the West’s leaders, in government and public dialogue, won’t speak the truth.  It’s that they can’t bear to not hear their made-up political narrative.  They demand to have it affirmed.

And so they are sacrificing their people on the altar of that narrative.  In the real world, where abstractions are constantly being steamrolled by reality, the kinds of atrocities committed by ISIS in Syria and Iraq have already hit Europe.  They hit Europe on the 13th of November, 2015, in the Bataclan concert hall in Paris.

The government of France has known since that night that the ISIS-level atrocities of Islamic extremists have arrived on European shores.  But instead of letting the French people know what they were dealing with, the government has suppressed the truth, and even tried to manufacture a lame alternate narrative.

Indeed, knowing what happened in the Bataclan, Prime Minister Manuel Valls blithely explained to the French this week, after the terrible truck attack in Nice, that France would have to live with terrorism.

Understand that – and you will understand that your all-encompassing government is not a “god” that can save you, or even a god that wants to.  It’s just a bunch of people who can’t handle the truth.

You’ll survive this eye-opening realization.  It’s OK to give up seeing human government as a universal, god-like arbiter of human life.  That’s the whole point of the American political experiment — and the main thing implied about politics by the Judeo-Christian tradition it came from.

Metaphorically speaking – let’s stipulate that – we are witnessing a Götterdämmerung.  Our small-g god of government is toast.  Baal will never answer.  And he’s going down, big time, before our eyes.

Awesome: Study about dating habits of liberals is everything you’d imagine
Next Post
The Obama Paradox: Does he or doesn’t he believe that ISIS is rooted in Islam? 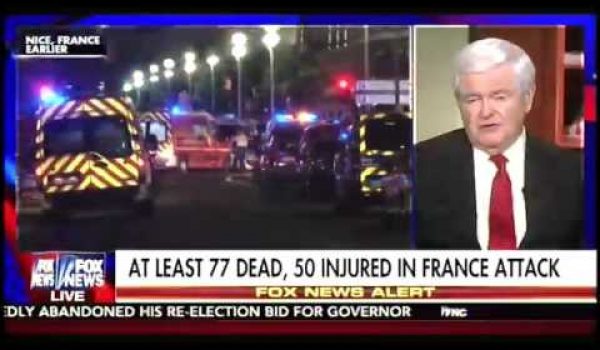