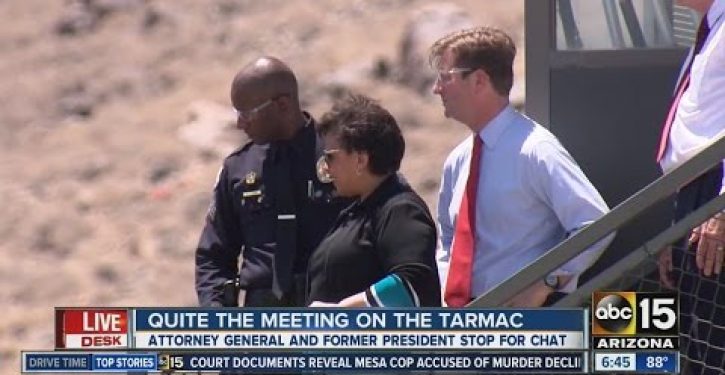 Sure it looks bad. Sure it looks like a potential conflict of interest. Former President Bill Clinton, whose wife is under investigation by the FBI, met with Attorney General Loretta Lynch at the Phoenix airport on Tuesday. The pair chatted for half an hour, on subjects ranging from grandkids to golf.

It might sound innocent if it were a just chance meeting, though chance encounters just don’t happen with high-visibility people like this. Besides, this was not a casual chat inside the terminal. The tête-à-tête took place aboard Lynch’s government-provided private jet.

According to Phoenix ABC affiliate KNXV, the meeting last about half an hour.

If the FBI recommends that Mrs. Clinton be indicated, it is up to Lynch and her Justice Department to decide whether to pursue the case. As it is, Lynch may bend to pressure from her boss, Barack Obama, to put the kibosh on the case. But if she does elect to drop the case, her private meeting with Bill Clinton is going to raise plenty of eyebrows.

Dad finds daughter’s ‘sexy selfies’ on social media, teaches her a lesson
Next Post
Does capitalism cause recessions?