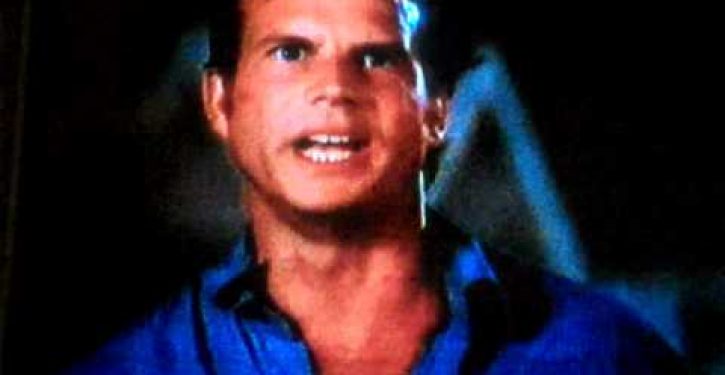 When those written transcripts start popping up on your local news broadcasts, and you don’t hear or see the parts from Orlando terrorist Omar Mateen about pledging allegiance to Islamic State — there’s a reason for that.  The Department of Justice is having the transcripts censored.

Attorney General Loretta Lynch explained, in an interview with NBC’s Chuck Todd on Meet the Press:

It appears, from the interview, that we will get to see Mateen’s references to his stated motive for the attack: that he “wanted America to stop bombing his country.”  He made this widely reported statement during hostage negotiations with the police.

(The interview with Lynch starts at the 2:00 mark.)

So Mateen’s claims and state of mind will be presented to the American public in the light most sympathetic to his cause.  You’ll be bombarded with an accusation that you’re “bombing his country” (which for the record is actually the United States of America, not Afghanistan, given that Mateen was born here and was an American citizen).  But the Obama administration won’t let you read, hear, or otherwise inspect his pledges of allegiance to a vile, bloodthirsty, atrocity-committing Islamic guerrilla-terrorist group.

There is no justification for this censorship, of course.  Consider the contrast between this bizarre, unjustified, Orwellian redaction and the constant references to the Confederate battle flag after the Dylann Roof atrocity in Charleston last year — a stream of references in which the Obama Justice Department fully participated.

Not only was the Confederate-flag theme constantly invoked.  The media and Democratic politicians and activists did way more than do Dylann Roof’s dirty work for him.  They manufactured the impression of a Mateen-like explicitness in Roof’s motives.

There were a few photos of Roof posted on social media with the Confederate flag or flag-themed items, but Roof made no declarations of allegiance during the attack, or before or after it, for that matter.  I don’t doubt the particular trend of his evil views, but he didn’t proclaim them clearly as a motive for his attack on the black church in Charleston.  Others had to flog that theme to increase its prominence and clarity in the public mind.

The DOJ was apparently happy to do that — to “further” Roof’s imputed propaganda, and “further proclaim pledges of allegiance” that he never actually made in relation to the attack.  For some reason, it wasn’t dangerous to the American public to have the Confederate flag (and a hysteria-wave about “white supremacism”) shoved in its face after the Charleston attack.  It was perfectly fine for the federal authorities to not just let Americans get a big load of Roof’s imputed propaganda, but to make it up and broadcast it for him.

In the case of Islamic terrorist Omar Mateen, however, the DOJ won’t even let the most basic truth about his clearly-stated motive into the written record, or onto the public airwaves.  Instead, DOJ is going to effectively sell the American public a lie, and censor the truth from history.

Once more:  this is Stalinism.  The U.S. Department of Justice is behaving like an organ of the Soviet State circa 1935.  It’s already here.

*UPDATE*: It’s a roller-coast week already, and it’s only Monday night.  After Lynch made her absurd case on Sunday for omitting the truth from the 911 transcript, DOJ decided on Monday to relent and release the whole transcript — albeit still a doctored one.  NY Post notes the ridiculous obviousness of the words originally left out:

Mateen claimed he was under God’s order to kill people at Pulse nightclub in the early hours of June 12. He also dropped the name of ISIS leader Abu Bakr al-Baghdadi, both of which were blanked out of the earlier versions.

“In the name of God the merciful, the beneficent (in Arabic),” Mateen said during his call at about 2:35 a.m.

“Praise be to God, and prayers as well as peace be upon the prophet of (Arabic). I let you know, I’m in Orlando and I did the shootings.”

The operator asked Mateen his name.

“My name is I pledge of allegiance to Abu Bakr al-Baghdadi of the Islamic State,” Mateen responded.

Asked his name one more time, Mateen replied: “I pledge allegiance to Abu Bakr al-Baghdadi, may God protect him (Arabic), on behalf of the Islamic State.”

Ryan and other lawmakers couldn’t grasp the motive for ignoring the obvious ISIS connection.

“Selectively editing this transcript is preposterous,” Ryan said in a statement Monday. “We know the shooter was a radical Islamist extremist inspired by ISIS. We also know he intentionally targeted the LGBT community.”

As posted earlier on Monday, however, the 911 transcript still suffers from politically-motivated inaccuracy.  Mateen didn’t speak of “God” in his ritual Arabic statements.  He spoke of “Allah.”  But FBI translators substituted “God” for “Allah” in the released transcript — thus both promoting a lie and obscuring the truth.