Unbelievably, President Obama described Orlando terrorist Omar Mateen this morning as having been self-radicalized over the Internet.

“It appears that the shooter was inspired by various extremist information that was disseminated over the internet,” Obama said.

If you know nothing about Mateen’s connections, both demonstrated and claimed, the whole description at the NY Post story probably sounds to you like it’s about a loner fanboy who picked up some bad ideas via social media.  The adjective “various” is a curious one, perhaps implying that there was more than one thematic source (i.e., something other than radical Islam).

Like clockwork, Obama reiterated the same point made repeatedly by federal authorities after the San Bernardino terror attack in December: that the attack didn’t appear to have been “ordered” by an external source.

“We see no clear evidence that he was directed externally,” Obama said from the Oval Office, using another name from the Islamic State terror group. “It does appear that at the last minute he announced allegiance to ISIL.”

I think the public is beginning to see through this empty statement, however.  It doesn’t matter whether a specific attack was directed or ordered by a designated terrorist group through a known chain of command.  This aspect of the event tells us nothing important.  Federal authorities keep saying it as if it conveys meaningful information.  But clearly, it doesn’t.  Fifty people are just as dead as they’d be if the attack had been specifically ordered by Ayman al-Zawahiri in a conveniently recorded phone call.

As for Omar Mateen’s “inspiration by ‘various’ extremist information disseminated over the Internet,” let’s take a moment to pull the threads on that, using information readily available to the public a mere 24 hours after the awful attack on the Pulse nightclub.

First, from counterterrorism expert Philip Haney’s radio interview with Breitbart on Sunday.  Recall that Haney is the whistleblower who reported that the Obama DHS ordered the literal purge of hundreds of database records on suspected terrorists and terror-linked organizations in the period from 2009 to 2013.  It was Haney who pointed out after the San Bernardino, California terror attack in December 2015 that those records would have allowed DHS to flag the husband-wife shooter team as extremist-connected, and therefore suspect.

Haney told Breitbart radio on Sunday just how openly available the information is connecting Omar Mateen’s mosque, in Fort Pierce, Florida, to Tablighi Jamaat, the same Deobandi/Salafi fundamentalist connection that would have been a red flag for San Bernardino terrorists Syed Farouk and Tashfeen Malik.  The connection runs through three interlinked groups, the Sharia Board of America, of which the Fort Pierce Islamic Center is a member; its parent organization Rahmat e-Alam; and Darul Uloom Chicago, with which Rahmat e-Alam is affiliated.

Haney said on Sunday night that he didn’t need access to any of the voluminous data he compiled on the Tablighi Jamaat during his NTC days to connect the dots after the Orlando shooting — he just went to the websites of the groups involved, as any media or law-enforcement investigator could do.

“This stuff is in broad daylight,” said an astonished [radio host Stephen K.] Bannon. “How can our officials sit there, and how can President Obama — the Commander-in-Chief of our armed forces — stand in front of a microphone, and not mention anything about this? How can they be sending people on TV all day, and we’re talking about domestic violence, if you just went to open-source websites and connected dots, how can people in the government who are being paid to protect us today, how can they not be doing this? It makes a rational person go crazy. It’s like we’re in some sort of Kafka novel.”

“I say that we’re in Alice in Wonderland, where the Dormouse has a .45,” replied Haney. “It’s very surreal.”

But Philip Haney’s expert and extensively developed background knowledge isn’t the only thing pointing to a global jihadi connection.  It would be very foolish to assume, given these links, that Omar Mateen merely radicalized himself while attending the Fort Pierce Islamic Center.   But there’s additional, material information to directly indicate that he was by no means self-radicalized.

Mateen is now known to have participated in an Islamic instruction course run by Marcus Dwayne Robertson, who is also known to his followers as Abu Taubah.  Robertson, an ex-Marine and long-time personality on the radical fringe of Islam, is said by the FBI to have been a bodyguard in the 1990s for the “Blind Sheikh,” Omar Abdel Rahman, mastermind of the 1993 World Trade Center bombing.  (Robertson denies that claim.)  After giving evidence against co-conspirators in a Muslim murder-and-robbery gang in New York, Robertson served four years in the ‘90s in federal prison, and has operated for the last decade as a kind of self-promoting activist and imam in the Orlando metro – with thousands of followers.

One of Robertson’s followers was the American suicide bomber who blew himself up for ISIS in Syria in 2014, Moner Abu Salha.  Moner Abu Salha and Omar Mateen both “studied” with Marcus Robertson via his Fundamental Islamic Knowledge group – which is at least one reason why Mateen was interviewed by the FBI during that period as a person of interest.

Robertson, according to sources cited by Fox News, actively encouraged his students to go abroad for bombing training.  He also taught skills he had learned as a Marine and honed during his gang days in New York, including the use of firearms and hand-to-hand combat.  Mateen’s connection with Robertson would certainly account for his familiarity with the AR-15.  It would also comport perfectly with Mateen’s antipathy toward gays: Robertson is well known for preaching strenuously against homosexuality.

Robertson, who founded his Florida training center in 2008, was held in federal prison from August 2011 to July 2015 on a tax-fraud charge in connection with his campaign to send recruits overseas for bomb training.  In a bizarre display of seeming incompetence, federal authorities were unable to convince a judge that Robertson’s sentence should be the harshest possible, given the terrorist connections of his activities.  He was released by U.S. District Judge Gregory Presnell in 2015.

The next step with the Robertson link is to pull the strings on it.  Here’s where the evidence becomes circumstantial – but that’s what intelligence and shoe-leather are for.  Considering the virtual inevitability of such potential connections panning out, it’s hardly a stretch to make them and find them credible.  The overriding point is that our federal agencies should be pursuing them and accounting for them, one way or another, rather than doing a hand-puppet show for the public about self-radicalization and “no external direction.”

Breitbart Jerusalem posted Sunday evening on a radio interview done on Sunday with an Islamic State-affiliated jihadi in Gaza, who said he was quite sure that Omar Mateen was a member of the Muslim Brotherhood-backed “jihadiya Salafiya.”  Jihadiya Salafiya just means “Salafi jihad,” and is the term for an umbrella group – a sort of political steering committee – by which some of the highest-profile Sunni Salafi terror organizations (including Al Qaeda and ISIS) are connected.  The leader and principal organizer of the jihadiya Salafiya is Ayman al-Zawahiri’s younger brother, Muhammad al-Zawahiri.  The umbrella group was connected, among other things, to the attack in Benghazi in 2012.

According to Abu al-Ayna al-Ansari, being interviewed by Aaron Klein on Sunday:

ANSARI: … We have from outside the Gaza Strip confirmation that the mujaheed who carried out the attack is a member of the jihadiya Salafiya. But whether he is a member of the Islamic State or another group this is not yet confirmed.

KLEIN: So you are saying that there is confirmation, to be clear, that he is a member of the jihadiya Salafiya, meaning of the jihadist Salafist franchise?

It’s certainly possible that Mateen is linked to a specific terror group through the Tablighi Jamaat connection via the Fort Pierce Islamic Center.  Evidence for Tablighi Jamaat being affiliated with the jihadiya Salafiya is not as strong and direct as it is for Al Qaeda and ISIS, but the possibility can’t be discounted.

However, Mateen’s link with Marcus Robertson, AKA Abu Taubah, bears special scrutiny.  It looks circumstantially probable that Robertson has for some time had a unique connection with the jihadiya Salafiya – through the backwater of the West African nation of Mauritania, which became known several years ago as a kind of proving ground for the political integration strategy of the jihadiya Salafiya.

Robertson has had a boresight on Mauritania throughout his Florida-based career as a radical imam, a focus that may have been fostered by an alleged “espionage” assignment he carried out there for the FBI in the mid-2000s.  (See links on Robertson for tales of his reported cooperation with U.S. federal authorities, after his release from prison in the 1990s.) He traveled to Mauritania himself a number of times, and the tax-fraud case against him was brought when he colluded with a recruit to file for a fraudulent tax refund, so the aspiring jihadi could go to Mauritania to learn bomb-making and other special skills.

As the Jamestown article (above) outlines, Mauritania was functioning as a new hub for cooperation among Sunni Salafi groups under the jihadiya Salafiya umbrella, just at the time Robertson was going there himself and arranging for recruits to go there (i.e., the 2009-11 timeframe).

Abu Saqer, leader of Jihadiya Salafiya, an Islamist militant group in the Gaza Strip that has made pro-ISIS statements, told WorldNetDaily that ISIS was taking advantage of a “growing movement within the black community toward Islam and the racist policies of the U.S. government.”

This connection, besides fitting with Marcus Robertson’s profile (an American black Muslim), fits with the extensively demonstrated links between groups like Black Lives Matter, the New Black Panthers, Nation of Islam, and radical “pro-Palestinian” organizations – the latter of which focus on Gaza, and usually have known connections to Iran-backed Hamas.

The connection to Muslim Brotherhood, Sunni-Salafi terrorist groups – under the jihadiya Salafiya umbrella – would be of major strategic interest on several fronts, including U.S. national security, as well as illuminating what Omar Mateen’s individual links may have been.

There’s so much meat here, so much to pursue and investigate, that it’s tough to narrow down where to start.  But you’re not hearing any of this from the mainstream media or the federal authorities.  Instead, you’re hearing the same song and dance about self-radicalization, with the implication that Omar Mateen is a “lone wolf,” and his case a tragic one of bad influences from “extremist information.”

This narrative is appallingly invalid.  And pushing it really is dereliction of duty.  Or worse. 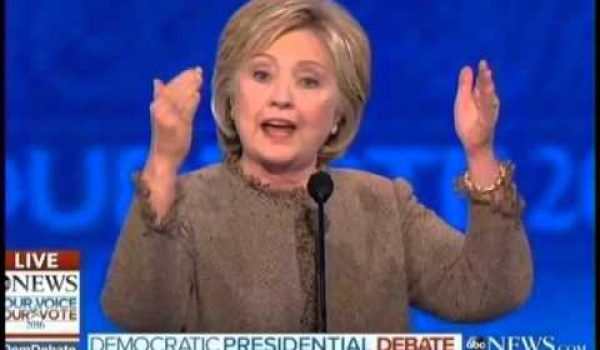 Flashback: Clinton declares we’re ‘finally where we need to be with ISIS’
Next Post
London’s new Muslim mayor to ban ‘body shaming’ ads with sexy women on public transport