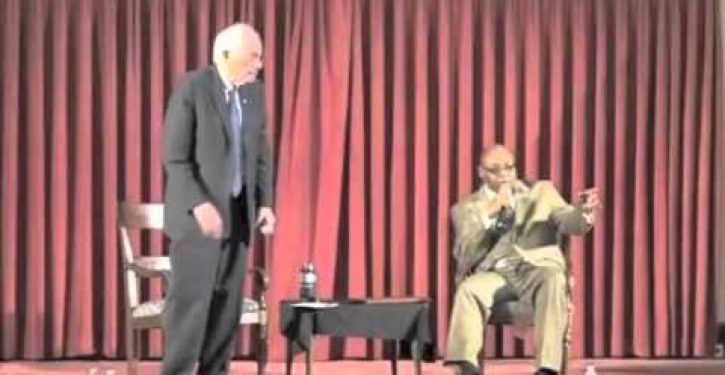 So much for having fought the Civil War.  While speaking at Tindley Temple United Methodist Church in Philadelphia, Pennsylvania, Bernie Sanders, the socialist running for the Democratic Party presidential nomination said that if elected, he would apologize for slavery on behalf of the United States.

“Senator Sanders, will you if the next president of the United States make the necessary and overdue apology?” one person asked.

“You want the short answer?” he asked in response.  “Yes,” he said to cheers and applause.  “There’s nothing that anybody can do to undo the deaths and misery — how many people we don’t even know who died on the way over here from Africa in the ships. But we have got to do everything we can to wipe the slate clean by acknowledging the truth. You know truth is not always an easy thing. There are a lot of things that we have done in this country that are shameful. We have got to recognize that and own up to it. So the answer is yes.”  That was followed by more cheering and applause.

And, the UK Daily Mail reported, while Sanders doesn’t support the idea of reparations being made in the form of a check, he “does believe the government should invest in low-income communities, many of which are black…”

In short, the 600,000 or so who died during the four brutal years of the War Between the States, which saw the end of slavery, died for nothing.  All the work and effort that has taken place since then also means nothing.  And as everyone knows, it’ll not stop there as the demands increase.

Great news: Crippled littoral combat ship has been sitting in Singapore since January
Next Post
The coming of the copyright troll