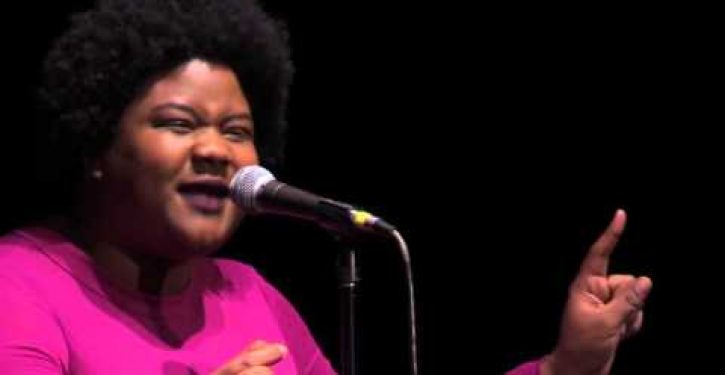 Before turning to the semi-literate tantrum that Black Lives Matter activist Imani Cezanne threw after getting herself tossed off a plane, let’s examine the chain of events that led up to her ejection.

Cezanne was one of four people seated in the exit row of the flight from Charlotte, NC to Atlanta, GA on March 25 when a female flight attendant asked them if they understood English.

Cezanne, 26 of Washington, DC, noticed the couple across the aisle seemed frustrated as if they did not understand.

The flight attendant immediately asked them to switch seats with another couple. The couple did not object….

Even if the couple had objected, the situation was none of Cezanne’s business.

Which didn’t stop her from making it her business. She is quoted as saying:

This is 2016, why don’t they have at least the translation in other languages to at least explain what’s going on … knowing they cater to people who speak other languages?

That couple looked frustrated and upset because they physically had to get up … I felt it was necessary for me to say something. [Emphasis added]

Cezanne went on to phone a friend to discuss to discuss “her concerns,” prompting a flight attendant to approach her and ask if she was “going to be a problem.” From there the situation escalated until ultimately, she was asked to deplane. When she refused to move (surprise!), the police were called in to forcibly remove her.

She later tweeted this:

Who knows a lawyer? Specifically one that is well versed in racism/discrimination. American Airlines bout to cash this Black girl out.

In other words, she is now looking for a payout from the airline over the discrimination she imagines she suffered as a result of race.

The Daily News article notes that federal regulations put into place 26 years ago require that passengers sitting in the emergency exit row understand English. As former LU colleague Mike Dorstewitz quips, “Maybe the reason was so someone who can actually understand instructions would be there in case of an emergency? Just a thought.”

Cezanne, whom the Daily News describes as “an award-winning poet” (she won the 2016 Women of the World Poetry Slam!), felt inspired by her mistreatment to pen an oeuvre titled  “Flying While Black.”

A video of her reading the poem follows, though having a sickness container handy is advised.

One delightful footnote to the story: Even though Cezanne was ejected from the plane, her luggage remained on board and continued on its way to Atlanta.

Growing evidence that D.C.’s plan to deter crime by taking this extreme action will fail
Next Post
New city ordinance forces family to destroy what?