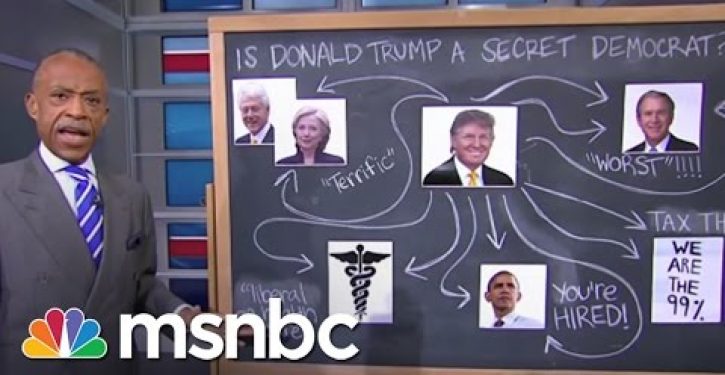 Meaghan Ellis of Inquisitr wonders aloud whether Al Sharpton might secretly be planning to endorse Donald Trump for president, noting that the the MSNBC host has been unusually silent despite several incidents that normally would have raised his hackles. These include the ejection from a Trump rally of a black protester, who was punched out moreover by an audience member as he was being escorted out of the venue. There is also the Donald’s seeming reluctance to disavow an endorsement of David Duke.

In fact, Sharpton has taken the opposite tack, defending Trump during an interview with Politico where he was about the GOP frontrunner’s controversial comments Mexicans and immigrants. Sharpton went so far as to refer to Trump as a white version of Don King.

Ellis notes that the question of a Trump-Sharpton alliance has been hinted at on social media, citing examples on Twitter from all across the ideological spectrum.

Here is a sample:

“Although Al Sharpton suggested that he’d never support Donald Trump’s presidential campaign,” Ellis writes, “his previous ties with the GOP front-runner raises concerns for many Americans who are paying close attention to the race.”

She notes that Sharpton devoted a segment of his MSNBC show in July 2015 to the question of whether Trump was a “secret Democrat”:

It’s an interesting theory, though as Ellis herself notes, Sharpton did recently intimate that he might leave the country if Trump is elected, and he has since gone further, declaring that the nation is in the midst of “the most reckless, violent, despicable election season that any of us have seen in our life time” — an obvious reference to the Trump phenomenon — adding:

If I had said any of the things Trump has been saying, they would have ran [sic] me out of the race. He says things for which he does not have to take responsibility.