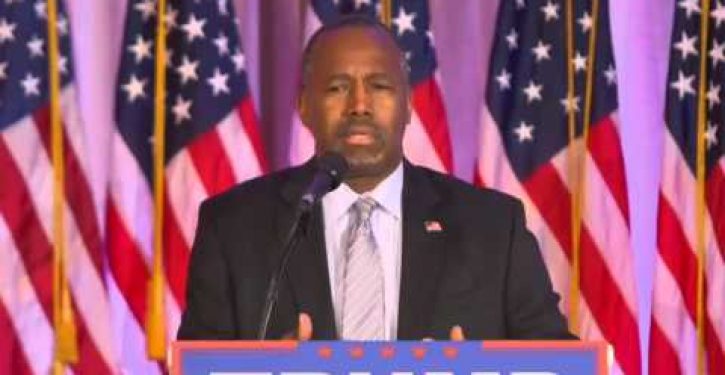 Yes, I’m bidding for your attention, here, with a challenging subject line.  Come, let us reason together.

The proposition is that it was surprising to see Ben Carson endorse Donald Trump this week – but maybe there’s a reason for it other than the two most popular suppositions:

1. Carson is naïve and foolish.  He doesn’t see what Trump really is.

2. Carson isn’t the man of God his own supporters thought he was.  He turns out to be an opportunist who doesn’t really adhere to the beliefs he professes.

This is a thought exercise.  The first stage is asking yourself this: did you foresee, a year ago, where this campaign season would be in March 2016?

You probably knew there was something deeply wrong in America, but you didn’t foresee that on Friday, 11 March 2016, Chicago would look like something from the Weimar Republic ca. 1930.  Even if you were up to date on the connections between George Soros, MoveOn.org, Black Lives Matter, and assorted other radical-left agitator groups, and even if you figured they would try something big in 2016, you didn’t have the precognition necessary to be prepared for Friday’s events: to somehow be ready to outmaneuver them.

No matter who you are, you didn’t know where we’d be on this day in March 2016.  So what makes you so sure you know what will happen the rest of this year?  And if you believe in the God Jehovah, what makes you certain that He doesn’t have a use for Donald Trump that entails figuring in the presidential politics of 2016?

I’m not a Trump supporter myself.  I haven’t been, and I’m still not.  But that’s not the same thing as saying that I know what God’s intentions are for Trump.  And it’s certainly not the same as saying I think God requires me to despise and repudiate Trump.

In fact, what I think is important – since this is politics we’re talking about – is considering respectfully why a whole lot of Americans are voting for Trump.  If we merely assume there’s only one view of Trump, for decent people, we cut ourselves off from the insight his candidacy is giving us into America’s condition today.

The Trump candidacy is about everybody.  It’s exposing one group after another, while giving a voice to still more.  It has exposed the great, plastic idol that is political correctness; it has exposed the cowering fear of the Republican leadership before that idol; it has exposed how deeply the leadership of both parties despises the people; it has exposed the tremendous number of Americans (including the “elite”) who haven’t been educated to understand what America’s founding principles actually were; and it has exposed how thin is our veneer of ritual “tolerance,” without true freedom, personal responsibility, and God.

In a sort of “meta” sense, Trump’s candidacy has also exposed a supremely important issue, and that is our modern use of human government as a spiritual substitute for God.  It has been very informative for me to see the number of people who are simply beside themselves at the prospect of Trump gaining public office, as if it would be the equivalent of Trump ascending the throne of the Almighty Himself.

What role do we think government and politics are supposed to play in our lives?  If we are in such a fever over candidates for president, we have come a long way from the idea of limited government urged by our Founders.

And now, just in the last 48 hours, the Trump candidacy has exposed even more.  It has exposed a shortsighted certainty in the minds of many Christians that their job is to fulminate against Trump – even if that means turning, without a second thought, against Ben Carson.  And even if it means blaming Trump for the ugly showdown in Chicago on Friday, instead of the radical-left organizers who’ve literally been plotting against him for months – and who will plot in turn against any other Republican who takes the pole position.

Yet in spite of all the uncanny surprises of the last year, many people seem to still be certain that they know what’s going on in the earth, and what everyone else should be thinking and doing.

I’d like to suggest that maybe we don’t know.  Consider the possibility that God’s purpose with the 2016 election season is not to show you that all the other Americans are in a hopeless, unregenerate state.  Maybe it’s to lay open the truths we all need to see in order to have spiritual revival – which, oh please get this, isn’t going to come through the political process.  (Which is why government should always be limited.)

Consider the possibility that God can use Donald Trump for purposes larger than any plan you could concoct, and that Ben Carson was sincere when he spoke as if he was acting from that sense.

The networks didn’t show him speaking in those terms.  But some of the blogs highlighted Carson’s words to that effect in the Q&A segment after he made his brief endorsement speech for Trump on Friday.  (I’m embedding videos of both the speech and the Q&A passage cited below.)

Carson was answering a question about what had led him to endorse Trump, and it was clear that he attributed it to insight coming from God.  Naturally, the tenor of the typical blogger comments on that has been sarcastic.

But I noticed something interesting about the transcripts of Carson’s response, which is that all of them have left out the words I’ve highlighted in bold.

I prayed about it a lot, and I got a lot of indications…people calling me that I haven’t talked to for a long time, saying, “I had this dream about you and Donald Trump…”

Just amazing things.  But, you know, I also, uh, tend to think that the way God speaks to you is by giving you wisdom.  And that wisdom says to me that if we allow this attempt to disrupt the will of the people to be successful, it will fracture the party in a [sic] irreparable way.

And that will hand the election to people who I personally believe would destroy our country.  And the reason I say that is because, you know, Hillary Clinton was a great friend of Saul Alinsky.  She was on a first-name basis with him when she was a student.

Saul Alinsky wrote the book Rules for Radicals, and if you haven’t read it, I recommend that you read it, and see the kinds of things that are recommended to change, fundamentally change this nation, from the great success that we have, to a socialist country.

And the dedication page of that book says, “Dedicated to Lucifer, the original radical who gained his own kingdom.”

I don’t want anything to do with anything like that.

Carson expresses the concern I see as morally consistent and coherent.  We can’t perceive clearly what God is doing in 2016, but there is reason to take seriously the revelations some people are reporting, including those about Trump having a special significance.  America is in a war for her soul.  When it comes to specifics, we can only see through a glass darkly what are the exact, right decisions to make; but we can know with certainty that it would be wrong for those in leadership to maneuver dishonestly against the people, as it appears both the Republican and Democratic leaders are prepared to do.

Was it necessary for Carson to actively endorse Trump?  I don’t know that I think so.  But in this most astounding of times, I’m not sitting in judgment on him.  The movement of God in the earth is so much bigger than our eyes can see, even now, that in my view, the wisest course for each of us is to just stop forming snap judgments about these things.

A case in point: a number of commentators are disgusted with Ted Cruz for jumping on the blame-Trump bandwagon after the incident in Chicago.  While I understand their chagrin, I’m giving Cruz time to realize what really happened before I join his critics.  If I’ve assessed him correctly, he’ll see things for what they are, when he’s had time to reflect.  I’m giving Carson a similar benefit of the doubt.

None of us has ever been here — right here — before.  (Although plenty of people have relevant experience from other nations.  But their experience isn’t with this crisis in America.)

The spirit of epistemic complacency that hovers over every judgment we make is a cyanide pill for our future as a nation, and it needs badly to be slapped out of our hand.  We aren’t God, our government isn’t God, our politics are not a path to controlling earthly outcomes to our exact satisfaction – and I think God is showing us that, in spades.

I’ll close by observing, once again, that the incompetence of politics and government to settle all of our affairs for us is the best reason there is to limit the scope of government.  If we understand that government doesn’t hold all our answers for us, then the big thing we must not give up on is keeping it limited.  We have a remarkable opportunity today to open our eyes to that reality and reclaim it.  Notice I didn’t say Donald Trump is the guy to guide us in doing that.  But his candidacy has opened the door to it in a way nothing else could have.  Don’t despise it.  God is not mocked.

New study links Zika virus to myelitis, brain damage in adults
Next Post
23 words that could save TRILLIONS of taxpayer dollars