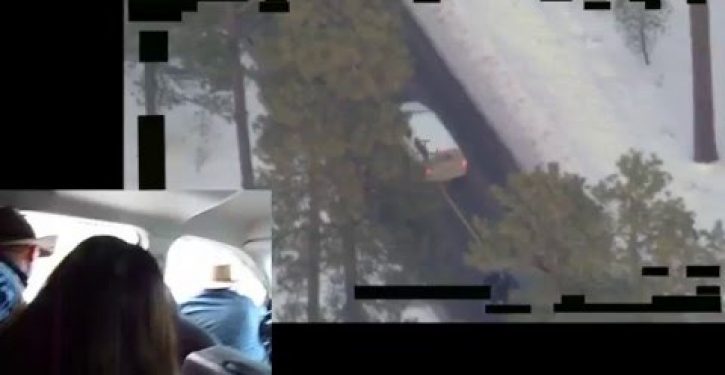 It’s too much to say, at this point, that the actual shooting of LaVoy Finicum, who participated in the “occupation” of the Malheur National Wildlife Refuge in January, might be deemed criminal.

But forensic work done by the sheriff’s department of Deschutes County, Oregon suggests that some or all of the FBI agents involved in that 26 January incident were less than truthful in giving their account of events afterward.

That’s likely to fan the flames of anger about the treatment of ranchers by federal agencies.  It has prompted a joint investigation by the Deschutes County sheriff and the inspector general of the U.S. Justice Department – and it could lead to charges against the agents.

At the center of the investigation is a bullet hole in the vehicle LaVoy Finicum was ordered to exit from, just before he was killed, apparently by FBI gunfire.  Les Zaitz at the Oregonian has the story:

Investigators from the Deschutes County Sheriff’s Office could account for bullet holes in the left front hood, the driver’s side mirror and the front grille. They came from the automatic weapon of a state trooper who had fired three times at the truck as Finicum raced at 70 mph toward a police roadblock on Jan. 26.

The angle of a fourth bullet hole didn’t match the others.

An elaborate computer analysis, a review of the FBI aerial video of the shooting scene and a video from a passenger in Finicum’s pickup produced a result that startled the team poring over evidence into Finicum’s fatal shooting that day.

The fourth round, police concluded, was fired by an FBI agent who subsequently twice denied to investigators ever firing his gun. As the investigation proceeded, detectives determined he also fired a second time, but didn’t hit anything at the scene.

According to Zaitz, the agent was one of one of five on-scene from the FBI Hostage Rescue Team.  And all five could be facing charges for misconduct.

I notice something interesting about this passage:

One investigator working on the task force pulled together by the Deschutes County Sheriff’s Office reported that he had been told soon after the shooting that two state troopers and two FBI agents had fired. He said the FBI agents approached him later to say they hadn’t fired their weapons.

“The FBI agents approached him later to say they hadn’t fired their weapons.”  Was this an initiative they took out of the blue, without having been asked the question?  That sounds awful darn particular.

The FBI hasn’t specified what four of the five agents are being investigated for.  But law enforcement authorities in Portland are describing “conclusive evidence about their conduct,” presented to the U.S. Attorney in Bend, OR, which certainly seems to imply misconduct of some kind.

As Zaitz says, the allusions to Ruby Ridge will be obvious.  But this incident, in its spinoffs and implications, is bigger than Ruby Ridge.  Ammon and Ryan Bundy, two sons of Cliven Bundy, were arrested for the refuge standoff in Oregon.  And when Cliven Bundy traveled to Oregon after their arrest, he too was arrested (last month), on a charge of impeding federal agents stemming from the standoff at his Nevada ranch in 2014.

The political nature of this arrest is obvious.  (If it were really about enforcing the law, Bundy would have been arrested in 2014.)

Keep in mind, Bundy can’t be charged with “failing to pay his grazing fees,” because there is no established basis in statutory law for those fees being assessed.  The federal government hasn’t pressed the issue in court because it would lose.  What the federal government has been trying to do throughout this saga is force the Bundys and other ranchers off their land, using pressure tactics, without the bother of having to get the actual law on the U.S. government’s side.  (My first link, at the top, has links to 2014 reporting with extensive background on the relevant cases.)

Nearly two years after the 2014 standoff, the federal government has also obtained 14 other indictments relating to it, and is launching a “wave of arrests.”  Why weren’t these people arrested in 2014?

Decide for yourself.  My assessment is that arrests in 2014 would have been unpopular and would have gotten a huge amount of media attention.  So, in a disgusting display of politicized law enforcement, the Obama administration waited until the public was paying less attention – and until the Oregon “occupiers” had been engaged in a true act of civil disobedience, one whose justification was weaker and more ambiguous.  Cliven Bundy was trying to save his livelihood and his own ranch, within the existing letter of the law; the action in Oregon involved squatting on a federal preserve to make a point about policy.

The Oregon occupiers were far more orderly and less disruptive, of course, than the radical “Occupy” movement that harassed our cities several years ago.  The ranchers gathered in Oregon endangered no one and destroyed nothing; they incommoded hardly anyone, unlike the Occupy thugs, who inconvenienced hundreds of thousands of city-dwellers for months at a time, and wreaked destruction and havoc on parks and businesses.

But people who have no idea what they’re talking about yammered hysterically about the Oregon refuge occupiers, imagining some dark menace from them.  And that encouraged the Obama federal government to finally take action against the protesters from the Bundy ranch standoff in 2014.

The federal government is being highhanded, dishonest, and loose with the law, abusing its authority to try to force ranchers from their homes and livelihoods.  Misconduct by FBI agents may well turn out to be only the tip of the iceberg here, and we can hope that more and more of the iceberg will be exposed.

I note that Tim Brown at Freedom Outpost, who’s been following this closely, has just posted a video (referred to in the Oregonian story) which synchronizes video records from a passenger in the truck LaVoy Finicum came out of, and the aerial video posted right after the shooting in January.  I’m embedding the video here, for your convenience, but be sure to visit Tim’s post.  He has links to previous analysis, and highlights the case that FBI agents were the source of the first two shots at Finicum, although they weren’t in his immediate vicinity (as the Oregon state troopers were) and were in no conceivable danger from him.

It’s a good thing that the Deschutes County sheriff has been doing his own investigation.  But we need to hope that the sheriff’s independence won’t be undermined by the Obama Justice Department, as has happened too often (e.g., in Florida, in the Trayvon Martin case; in Ferguson, MO; in Baltimore), and that the sheriff won’t be intimidated or silenced, if he has truth that needs telling.