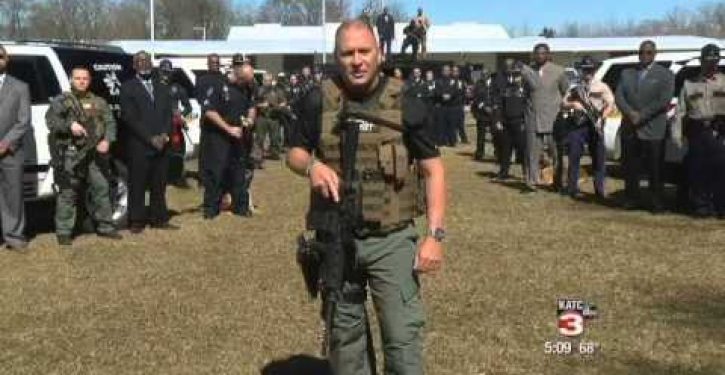 Captain Clay Higgins, whose nickname is the “Cajun John Wayne,” has resigned from the St. Landry Parish, La., Sheriff’s Office after a controversial video he released went viral.

In the video, which addressed a local street gang known as the “Gremlins,” Higgins warns:

You will be hunted, you will be trapped, and if you raise your weapon to a man like me we will return fire with superior fire.

Higgins, who appears in front of a cadre of fellow officers, wielding an automatic rifle, goes on to say:

I’ll meet you on solid ground anytime, anywhere, light or heavy. It makes no difference to me and you won’t walk away.

After the video appeared, Higgins’s superior, Sheriff Bobby Guidroz, ordered him to “tone down his unprofessional” language or else. Higgins chose else.

So which words in particular did the local community and even the ACLU take issue with? Watch the video, and see if you pick them up.

Did you hear them? If not, Acadiana station KLFY, explains:

In the video, Higgins refers to the suspects as “animals” and “thugs”, words that are receiving mixed reactions.

And why is that so problematic? Maybe this video still of ten captured Gremlin members will help you see the problem more clearly.

Obama: ‘Plans we put in place to grow the economy have worked’
Next Post
4 Catholic nuns, 12 others killed in Yemen retirement home