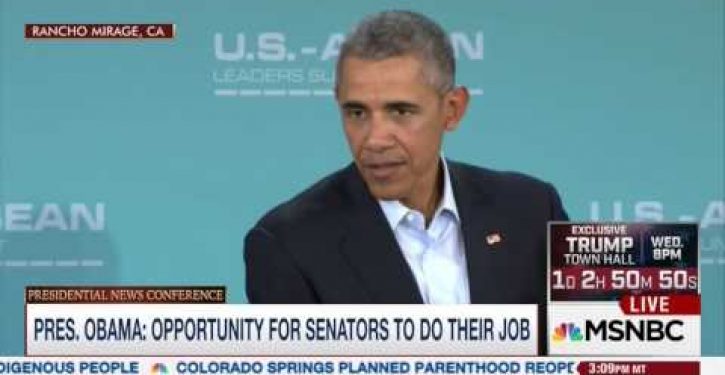 That took even less time than anyone expected. Yesterday, Senate Judiciary Committee Chairman [score]Charles Grassley[/score] (Iowa) broke ranks with his fellow Republicans, announcing at a press conference that he wasn’t ruling out confirmation hearings and a vote by his panel on an Obama Supreme Court nominee.

I would wait until the nominee is made before I would make any decision. In other words, take it a step at a time.

I think I have a responsibility to perform, and I can’t worry about the election. I’ve got to do my job as a senator, whatever it is. And there will be a lot of tough votes between now and the next election.

One can admire Grassley’s dedication to the oath he swore to uphold as a U.S. senator, but if only one of the two major political parties is willing to honor that pledge then the pledge become meaningless.

Grassley’s statement is a departure from the view he articulated Saturday when he said, “It only makes sense that we defer to the American people who will elect a new president to select the next Supreme Court Justice.”

Naturally, a vote by Grassley’s committee is mere lip service unless the vote is brought to the floor of the entire Senate, which Senate Majority Leader [score]Mitch McConnell[/score] said is not going to happen. Famous last words?

In the meantime, Barack Obama was buttonholed yesterday on the hypocrisy of his having voted to filibuster the appointment of Samuel Alito while himself a U.S. senator as compared with his insistence now that senators “do their job.” His non-answer may be viewed in this video:

U. of Oregon frats open doors to anyone who ‘self-identifies as male’
Next Post
How Bernie Sanders can win the black vote in South Carolina and beyond