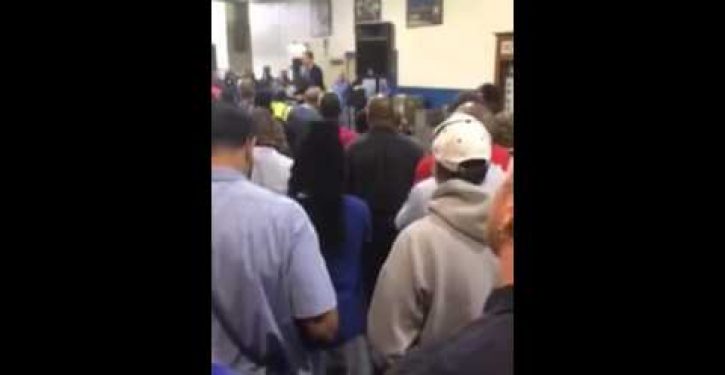 Carrier Air Conditioning announced this week that it’s shipping 1,400 jobs to Mexico, and the reaction of a room full of employees when they learned the news was caught on camera.

“The best way to stay competitive and protect the business for long-term is to move production from our facility in Indianapolis to Monterrey, Mexico,” a man speaking on behalf of the company says in the video to a large crowd of employees in a gymnasium-like room.

The crowd immediately erupts in shouts and boos. “That’s why you brought all those motherf**kers here!” one man shouts.

“Listen, we’ve got, I’ve got information that’s important to share as a part of transition,” the speaker continues. “If we could go ahead, if you don’t want to hear it other people do, so let’s quiet down. Thank you very much.”

“We also intend to relocate the distribution center from Indianapolis as well,” he continued. “Relocating our operations to Monterrey will allow us to maintain high levels of product quality –”

“Why would we care?” a man interjects.

“At competitive prices, and continue to serve the extremely price sensitive market place,” the speaker says, as people are heard yelling and exclaiming in the background. “I want to be clear, this is a strictly business decision.”

At that many laugh and continue to boo the speaker. “Once again, let’s please get, more information to share,” he says. “And by no means reflects the performance of this facility or any individual within it.”

The transition will not begin until mid-2017 and will take place over three years. The speaker ensured the crowd they’ll discuss the plan with the employees’ union representatives.

“Through all the transition, we must remain committed to manufacturing the same high-quality products,” he says, to which someone yells loudly: “F**k you!”

The speaker again pauses to quiet the crowd, and continues:

We still have a job to do. This is an extremely difficult decision, it was made most difficult because I understand that it will have an impact on all of you, your families and the community. As we continue and just as we are doing today, we will provide you with as much information as soon as possible about the transition. This will allow you to understand the plan better as well as the impact on you personally. We are committed to treating you with respect throughout this transition, and we will work with your union representatives to help ensure that this is the case.

Keeping American jobs at home has been one of President Obama’s recurring themes throughout his two terms, even though in 2012 CNSNews revealed that Obama’s 2009 economic stimulus plan (aka the 787 billion American Recovery and Reivnestment Act) gave millions of federal dollars to foreign companies or funded domestic companies that built factories in foreign countries or bought foreign products.

An article in the Washington Post published around the same time cited critics of the president on the left who complained that he had failed to protect American jobs from moving overseas. “They point to a range of actions they say he should have taken: confronting China, reining in unfettered trade and reworking a U.S. visa program that critics say ends up sending high-tech jobs abroad.”