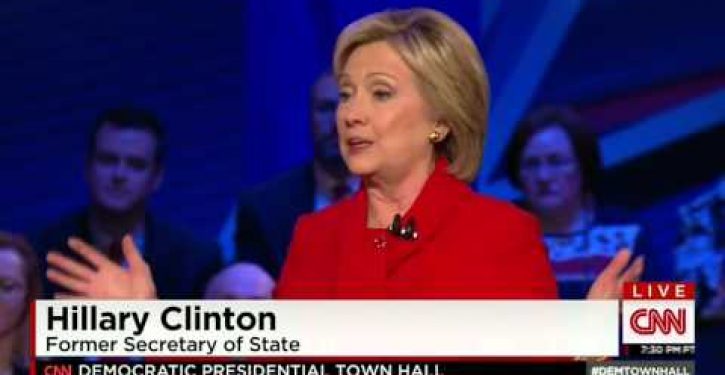 Did you miss the Iowa Democratic town hall on CNN? A clip that appears further down will tell you everything you need to know about the last-minute effort to revive the Clinton campaign.

During Clinton’s question and answer session, a millennial told Clinton that not only is he voting for [Bernie] Sanders, but his friends don’t think she’s very honest. As a warning, Clinton laughs loudly at the beginning of this clip.

“It feels like there are a lot of young people, like myself, who are very passionate supporters of Bernie Sanders and I just don’t see the same enthusiasm from younger people for you. In fact, I’ve heard from quite a few people my age that they think you’re dishonest but I’d like to hear from you on why you think the enthusiasm isn’t there,” Iowa native Taylor Gipple asked.

As I noted on Wednesday, Hillary’s poll numbers have been tanking in the all-important area of honesty and trust of late. A survey of Democratic primary voters found that honesty is the trait most highly valued in a prospective nominee, followed by experience, and caring about people like themselves (a central theme of the Clinton campaign).

On the issue of honesty, Hillary lags behind Sanders by a whopping 27 points.