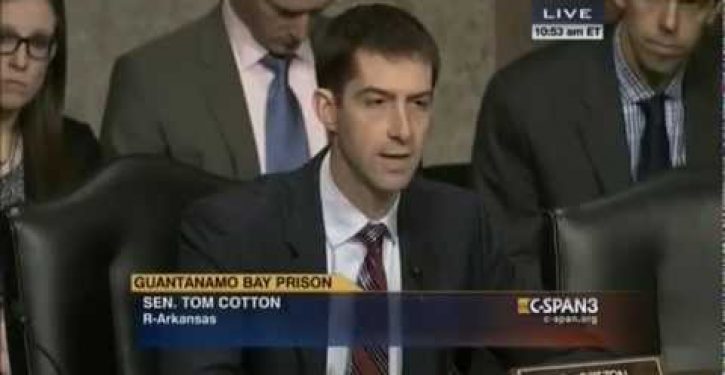 Closing the prison at Guantánamo Bay in Cuba, which Barack Obama has been determined to do since his first day in office, does have its benefits. Back in 2013, the Defense Department’s Office of the Comptroller released a report revealing that Gitmo costs $2.7 million annually per inmate, making it the most expensive prison ever.

The question that arises now in the twilight of the Obama presidency is whether saving the American taxpayers the expense — which is the only realistic benefit at this juncture — offsets the Pandora’s Box opened by the facility’s closure. With 107 inmates remaining, the total annual bill for prisoner upkeep is $288,900,000, which is a drop in the bucket.

But what about the administration’s argument that the prison is a recruitment tool for terrorists? As recently as Thursday, the president said:

Guantanamo has been an enormous recruitment tool for organizations like ISIL. It’s part of how they rationalize and justify their demented, sick perpetration of violence on innocent people.

Obama has been making that argument from the beginning. But is it valid today? An article published last June at Lawfare, a blog maintained by law professors Robert Chesney, Jack Goldsmith, and Benjamin Wittes, takes a dim view of that claim:

Yes, Guantanamo shows up repeatedly in jihadist propaganda. But it has grown far less salient over the last few years, playing a much bigger role in the words of Al Qaeda and AQAP a few years ago than it does now — and playing a far lesser role in the propaganda of ISIS than it does in that of older terrorist groups. What’s more, Guantanamo has never played a big role in any terrorist group’s propaganda compared to the issues that really animate those groups. So while it’s easy to find examples of terrorist leaders mentioning and denouncing Guantanamo, these were never the major themes of jihadi propaganda but were, at most, supporting arguments.

[I]t is hardly clear that Guantanamo’s closure would matter much, so far as concerns the contents of jihadist propaganda. U.S. detention operations at Bagram and Abu Ghraib, after all, are now in the past — but that hasn’t persuaded jihadis to drop their invocations of both prisons in their online literature.

This counterargument, the writers note, is not one Obama has never heard. In February, freshman Senator Tom Cotton (R-Ark.) accused the president of playing politics when it comes to closing Gitmo. In the C-SPAN video that follows, Cotton can be seen grilling Brian McKeon, Principal Deputy Under Secretary of Defense for Policy, on the “risk balance between recidivism of released terrorists and the propaganda value that terrorists get from Guantanamo Bay”:

In an article to appear in the Dec. 28 issue of The Weekly Standard, Steve Hayes is even more critical of the president’s position on Gitmo, which he asserts is built on a foundation of lies:

Barack Obama is releasing dangerous terrorists against the recommendations of military and intelligence professionals, he’s doing so at a time when the threat level from radical Islamists is elevated, and he is lying about it. He is lying about how many jihadists he has released and lying about their backgrounds, all part of his effort to empty the detention facility at Guantánamo Bay.

The facts: Ibrahim al Qosi was a senior al Qaeda operative and a close associate of Osama bin Laden. An 11-page classified assessment of Qosi from U.S. military and intelligence professionals on Joint Task Force Guantánamo was made public by WikiLeaks. From that assessment: “Detainee is an admitted al Qaeda operative and one of Usama bin Laden’s (UBL) most trusted associates and veteran bodyguard.” And: “Following a 1994 assassination attempt against UBL, UBL chose detainee to be one of approximately ten individuals assigned to his protection detail.” And: “Detainee has been very forthright regarding his commitment to UBL and al Qaeda. He explains his commitment to UBL as a religious duty to defend Islam and fulfill his obligation to jihad.” The assessment concluded: “Detainee is assessed to be a HIGH risk, as he is likely to pose a threat to the US, its interests, and allies.”

The administration might object to Haye’s strong language, but there is no escaping the truth of his assertions, as the White House knows only too well. In December 2014, Judicial Watch released a bombshell noting:

[T]he U.S. government is secretly admitting that it erred in at least one case, the release of a Saudi national named Ibrahim al-Rubaysh. In late 2006 the Bush administration repatriated him back home under a Saudi Arabian “rehabilitation” program that supposedly reformed Guantanamo Bay jihadists but instead has served as a training camp for future terrorists. In fact, in 2008 counterterrorism officials confirmed that many of the terrorists who return to “the fight” after being released from U.S. custody actually graduated from the laughable Saudi rehab program, which started under Bush and continued under Obama.

The fact that the botched policy began under Obama’s predecessor should afford him cold comfort, especially in light of his plan in 2009 to try 9/11 mastermind and Guantánamo detainee Khalid Sheikh Mohammed in a criminal court in New York City. Luckily, cooler heads prevailed, and the president was dissuaded from that experiment.

Killer loses lawsuit against prison for running out of waffles, serving leftover cobbler
Next Post
Why the Freddie Gray mistrial changes everything going forward