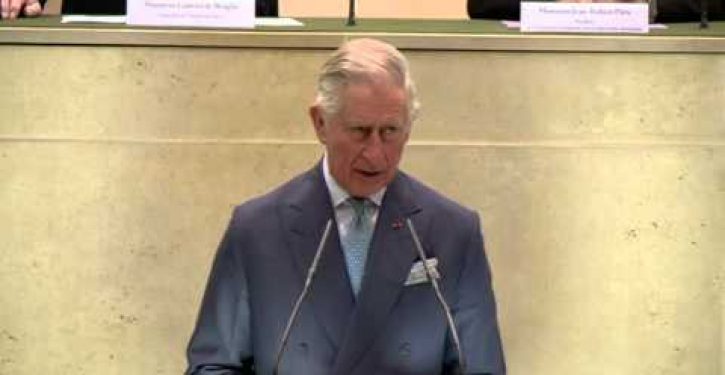 The man has his uses.

Now and then, a prince who makes a lot of, shall we say, poorly briefed comments lets fly with something everyone knows is true, but no one has the guts to say.

Who could forget, for example, his 1984 denunciation of modern architecture? – a withering point in crying need of making.  Modern architecture is, for the most part, horrible.  Calling it a carbuncle on the landscape doesn’t go nearly far enough.

Now the Prince of Wales has given much-needed voice to the obvious, while making the rounds during the UN climate summit in Paris.  At the Institut de France, where he was awarded the Prix Rabelais for his advocacy of organic farming, he devoted a portion of his remarks to warning that the EU ban on the use of unpasteurized milk is killing off precious artisanal cheeses.

In an impassioned speech in French last week during the Paris climate conference, Prince Charles declared his love for cheeses such as Brie de Meaux, traditionally made with unpasteurised milk, “lait cru”, which the European Union has banned.

He recalled a visit to Paris in 1992 when he pleaded the case for British specialist cheese producers – and said that more than two decades on, his concerns were only heightened in a world of genetically modified produce.

“What will become of the Brie de Meaux, the Crottin de Chavignol or the Bleu d’Auvergne?” the 67-year-old asked.

“In a microbe-free, progressive and genetically engineered future, what hope is there for the old-fashioned Fourme d’Ambert, the malformed Gruyere de Comte or the odorous Pont L’Eveque?”

(As an aside, Charles far outdoes Secretary Kerry in the nasal-Anglophone-pronouncing-French sweepstakes.  Video below.)

In the course of his rant, the prince endowed us with the marvelous locution “bacteriologically correct,” to describe a condition he very properly condemns.  (The French version, bactériologiquement correcte, is, frankly, to die from.)

President Obama, faced with Islamist terrorism, talks “climate change.”  Prince Charles, faced with a climate summit, talks artisanal cheese.  As a policy focus, both make equal sense.  The real difference is that the prince is right.  Bacteriological correctness is an exceedingly stupid reason to see rare, fabulous cheeses perish from the earth.

Quote of the Day: Obama has lived and breathed evolving threat of terrorism
Next Post
Provocation: Sailor seen with MANPAD on Russian warship transiting Bosporus