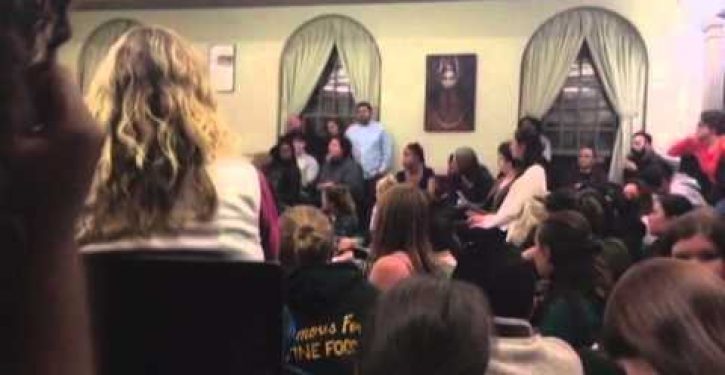 A newly-released video shows the remarkable extent to which Dartmouth College’s administration has chosen to side with Black Lives Matter (BLM) protesters who harassed white students at the college library.

The new video was acquired and uploaded to YouTube by The Dartmouth Review, Dartmouth’s independent conservative newspaper which has also taken the lead in reporting the events of last week’s protest. In the video, Dartmouth vice provost Inge-Lise Ameer reassures BLM-aligned protesters that she is completely on their side, and many other administrators feel the same way.

Parts of Ameer’s comments had already been reported by eyewitnesses, namely her apology to the activists for their hostile media treatment, and her quip that “there’s a whole conservative world out there that’s not being very nice.”

But the new 10-minute video shows just how far Ameer went in giving her sympathy to the activists at the expense of their critics. Ameer describes the protest as a “wonderful, beautiful thing” and says claims of harassment and aggression (which were made in multiple eyewitness accounts) were “ridiculous.”

So far, Dartmouth has said nothing regarding allegations that BLM protesters screamed racist obscenities like “F*ck you, you white racist f*cks!” and “Filthy white bitch!” to white students in the library, even though one of the protest’s organizers has admitted that harassment and profanity were both intentional parts of the protest.

Instead, in the video Ameer shows sympathy for protester claims that they were the real victims of last Thursday’s protest. She cited as an example protester complaints that students slammed doors in the face of protesters to avoid being berated by them.

“I’m gonna really put it out there now,” she says. “I don’t have any Safety and Security reports from last Thursday. If somebody hurts you, or slams a door in your face, or calls you a terrible name, I need you to file a report so that I can act on it.”

“We will protect you. We always have and we always will,” she adds. She says the school will do its best to identify anonymous users of Yik Yak who were allegedly threatening BLM protesters on the app, in the hopes of punishing them.

Ameer also indicates that she is strongly committed to fulfilling Black Lives Matter requests about how to change Dartmouth, saying she wanted to have a monthly meeting with activists in order to create a reform plan, and adding she would work hard to direct more college money to minority organizations. She pledges to reread the so-called “Freedom Budget,” a lengthy list of demands protesters submitted to the school nearly two years ago, to get ideas.

Toward the end of the video, BLM activists call for the school to sue The Dartmouth Review over its reporting of the protest (the paper is fully independent and operates free of school oversight or approval), but Ameer indicated the school wasn’t ready to go that far, instead saying the school had released a statement pushing back against the Review’s narrative of events.

Cartoon of the Day: Enemy number one
Next Post
Did Ted Cruz just ‘call out’ Barack Obama?