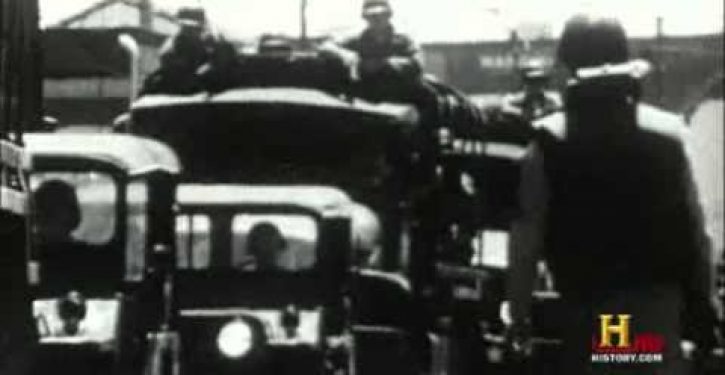 Two presidents have now weighed in on the protest movement at the University of Missouri.

One, Tim Wolfe, was the president of the university system, until today.  He has resigned, as demanded by the student protesters, who include more than 30 players on the football team.

The other is President Obama.  His spokesman, Josh Earnest, publicly praised the protesters during the White House presser on Monday.

“I think this also illustrates something that the president talked a lot about in the context of – in his campaign, that a few people speaking up and speaking out can have a profound impact on the communities where we live and work,” he said during the daily press briefing today. …

“That’s the kind of dialogue and work and unity that the Mizzou community is going to need to make progress on this issue,” Earnest said, in reaction to the decision calling it “a testament to the courage of the people on campus.”

The “dialogue” referred to seems to consist of the letter written to the university by a graduate student, Jonathan Butler, who went on a hunger strike last week.  Daily Caller’s Eric Owens summarizes the letter’s allegations:

In a letter to school officials posted on his Facebook page, Butler indicated that he began his hunger strike because someone in a pickup truck allegedly shouted a racist insult at a black student government member, because state law prevents Planned Parenthood from performing on-campus abortions and because someone drew a swastika with human feces in a dormitory bathroom.

Reportedly, Mr. Butler was also perturbed back in July when Mizzou had to cancel subsidized health insurance policies for grad students, a move forced by the pervasive cost impacts of Obamacare.

Groups of protesters have marched across the University of Missouri campus for the last 6 days in response to Butler’s ongoing hunger strike. The protesters are calling themselves Concerned Student 1950. (The name relates to the year the first black student matriculated at Mizzou.)

(Butler’s Twitter feed is here, if you want to see exciting clips of the campus protests.)

Tim Wolfe met with Butler and the protesters on Friday, but it didn’t do any good.  On Sunday, state lawmakers – both Democrats and Republicans – called for him to step down.  This no doubt had a great deal to do with his decision to do that on Monday.

The Mizzou Board of Curators on Monday announced a list of new initiatives to appease the protesters, to include the appointment of a Chief Diversity, Inclusion and Equity Officer for the UM system, and the creation of a “diversity, inclusion and equity task force to develop both a short- and long-term strategy, plan and metrics for the UM system based on an inventory and audit of current programs, policies and practices.”  (Just quoting verbatim, here.)

The Board of Curators announces list of new initiatives @CoMissourian pic.twitter.com/DI81QEK5s5

Meanwhile, Chancellor R. Bowen Loftin of the UM main campus in Columbia also announced on Monday, about three hours ago, that he will be stepping down at the end of the year.

This is all stupid.  If there is a real reason to suspect harmful institutional racism, or any other endemic attitude or influence that makes life hell for students at Mizzou, then the legislature should do more than simply ask the university system president to step down.

Lawmakers should get on the floor of the legislature and demand that the governor use his executive agencies – the ones the taxpayers are paying for – to investigate what’s going on, and determine whether it rises to the level at which people should lose their jobs, and university policy should change.

Heck, legislators themselves should head to the campuses and start meeting with students.  They should have students come testify to legislative committees.  If this is so serious, it needs to be documented and proven, by reasonable standards, in the open, and dealt with accountably.  University funding and administration should be at issue.

State universities are just institutions like any other that the taxpayers are paying for.  They shouldn’t get away with anything other institutions can’t.

But that includes lending themselves to malingering by beneficiaries, and abuse of the taxpayers’ tolerance and patience.

I don’t see anyone in this drama taking the two specific accusations about racist incidents – the “n-word” shouting, and the swastika-in-feces drawing – seriously.  All I see is those allegations floating around unproven, and being leveraged to produce a political effect.

That isn’t a way to produce “justice.”  No one has the “right” to gain de facto control of the university facilities provided at great expense by the taxpayers, through using such means.

What would Reagan do?

There was another governor – and eventual president – who operated on this latter premise some 46 years ago.  Students at Berkeley threatened to tear the university down if the school went ahead with a plan to build a parking lot, in an area where the students said they wanted to establish a “People’s Park.”  (They were already camping out there on a continuous basis, trashing the place up, and refusing to leave when ordered to.)  When the university didn’t buckle under their pressure, the students, in May 1969, mounted a mass protest that quickly turned violent.

Governor Ronald Reagan called in the California Highway Patrol (i.e., the state police) to assist local law enforcement. When the protests threatened to get even further out of control – numerous students were injured, and one was shot (and later died of his wound), on a day dubbed “Bloody Thursday” – Reagan called out the National Guard to restore order.

The students didn’t get their way.  This was considered a terrible blow by leftists, and many of them are still angry over it.

But at no time did Reagan either back down or show sympathy toward the rioting students or radical faculty who supported them.  His care was for law and order, and the rightful expectations of the people paying for the University of California at Berkeley: the California taxpayers.

In addition to the video at the Atlantic link above, this clip from Reagan’s press conference after “Bloody Thursday” gives a flavor of his posture.

His point near the very end of the clip is particularly noteworthy:

All of it began the first time some of you who know better, and are old enough to know better, let young people think that they had the right to choose the laws they would obey as long as they were doing it in the name of social protest.

Now, the situation at Mizzou is a different one.  Disruptive “hippie” behavior and drugs are not at issue; no one has perpetrated any violence so far, and that’s a good thing.  But the university system, which the taxpayers pay for, is being extorted as surely as if there had been violence.

And that’s not the way to settle these things.  The people of Missouri have the right to expect better of their public authorities.

What would Reagan do?  I think he’d step in and say, “OK, if you folks on campus can’t handle campus relations and these allegations of racism, I’m going to administer your problem for you.  What we’re not going to do is make the taxpayer spend one dime on vague, open-ended measures to address unproven allegations.  And we’re certainly not going to start firing people over them.  If there’s something to find here, some real racism going on, my duly appointed task force is going to find it, and there’ll be hell to pay.  If not, then we’re going to report that to the people, with open books, and I won’t ask the people to tolerate any more politicized nonsense on the campuses they spend so much to maintain.”

Reagan’s no longer with us

Since Reagan isn’t here anymore, the default option may be simply shutting the whole thing down.  What’s happening at Mizzou isn’t higher education anymore.  Close the books, and move on.  The taxpayer has paid for enough.