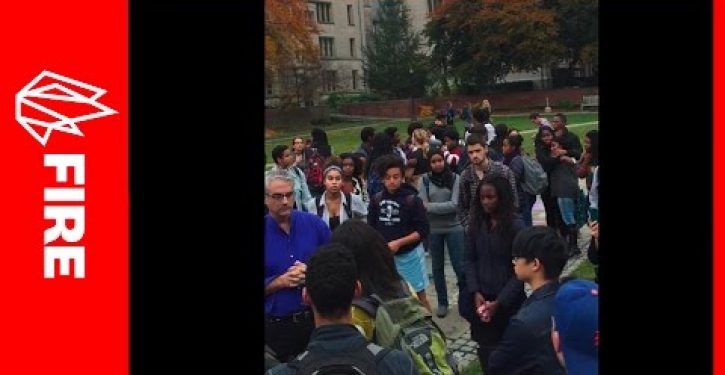 A new video has surfaced that shows a student at Yale University screaming at one of the school’s professors for allegedly failing to make the campus a “safe space” in general for students.

Yale University has been hit by controversy in the past week after professor Erika Christakis, associate headmaster of the school’s Silliman College, sent an email to the college’s members suggesting that they shouldn’t be overly sensitive about Halloween costumes that engage in “cultural appropriation.” Instead, Christakis encouraged students to tolerate them and avoid trying to censor expression.

“Is there no room anymore for a child or young person to be a little bit obnoxious … a little bit inappropriate or provocative or, yes, offensive?” Christakis wrote. “American universities were once a safe space not only for maturation but also for a certain regressive, or even transgressive, experience; increasingly, it seems, they have become places of censure and prohibition.”

In response, Christakis and her husband Nicholas (Silliman’s headmaster) have been besieged by calls for their resignation by students who say they have made Yale a dangerous place for black students. The controversy has become even more intense because of simultaneous allegations that the school’s Sigma Alpha Epsilon fraternity chapter held a “white girls only” Halloween party.

These tensions led up to a confrontation on Thursday, as students surrounded Nicholas Christakis in an open area on campus and criticized him. The confrontation is chronicled in a series of four videos, with the third containing the most fireworks (warning: profanity alert):

The conversation is at first tense but calm, but it escalates rapidly after a student accuses Christakis of creating an “unsafe space” at Yale.

“I did not—,” Christakis attempts to reply, but a student aggressively interjects.

“Be quiet!” she screams. Then, voice quavering with emotion, she continues. “[In] your position as headmaster, it is your job to create a place of comfort and home for the students who live in Silliman.”

Christakis attempts to dissent, saying “No, I don’t agree with that,” unleashing a torrent of shrieks from the student.

“Then why the f*ck did you accept the position? Who the f*ck hired you?,” she cries, drowning out any attempt by Christakis to explain himself (Christakis never raises his voice, except to be heard by the crowd).

Another student, a male, joins in, shouting “You’re supposed to be our advocate!”

The student continues the attack, saying that students will transfer out of Yale because of its failure to be a “safe space” for them. As she continues, one passing student yells out “Retweet!” apparently to endorse her attacks.

“You should not sleep at night!” she says to finish the verbal assault. “You’re disgusting!”

After this last outburst, the crowd around Christakis disperses.

Despite the ongoing attacks, thus far the Christakises have resisted calls for their resignation from their posts at Silliman. Instead, they have taken to Twitter and other platforms to defend  and argue that modern college students have become overly coddled.

Pres Obama has raised concerns about university students being “coddled and protected from different points of view" https://t.co/nuysx64cBS

"When a Generation Becomes Less Tolerant of Free Speech." Interesting observations and debate in @nytimes https://t.co/RxwdmrMFux

This is not the first time black students at a university have demanded a “safe space” from white people. A group at Ryerson Unviersity in Toronto dubbed the Racialized Students’ Collective held a meeting in March on the subject of “building an anti-racism community on campus” from which white students were barred.