Progressive faculty justify the absence of moderate and conservative voices on campus by saying that conservatives are stupid. As a result, moderate Republicans with Ivy League degrees and genius level IQs sometimes can’t find a job in academia.  My former boss had a degree from the highest-ranked law school (Yale) and had published scholarly articles, but could not find a law faculty job as a young lawyer due to his moderately-conservative leanings. (He later successfully argued a landmark Supreme Court case).

But ignorance certainly doesn’t keep progressives from being hired, especially in women’s studies departments. A classic example is Barbara LeSavoy, Director of Women and Gender Studies at The College at Brockport in New York, who thinks the President can rule by decree. Every schoolchild in her generation was taught that Congress enacts laws, not the President (the President can successfully veto a law only if it was passed with less than two-thirds of the votes). But LeSavoy is unaware of this basic constitutional requirement (typical of all Western democracies), and thinks the President can ban all guns just by issuing a decree. She penned an October 10 op-ed in the Rochester Democrat and Chronicle urging President Obama to ban guns: “I urge President Obama to ban firearm possession in America. He is the President of the United States. He can change the country. He can do it today.”

Her op-ed was aptly summed up by a commentator as “Please, Dear Leader — Ban Firearms By Decree.”

Writing “with a bleeding heart,” LeSavoy declared: “I admire Obama. But he has let me down.” Her embattled but resilient faith in her collectivist savior could be fully restored if he would simply “ban firearm possession in America.” Doing this would be a matter of utmost simplicity, she insists, since Obama “is the president of the United States. He can change the country. He can do it today. I believe in him.”

In fact, the only thing about America LeSavoy apparently finds worthwhile is Barack Obama and what she thinks he represents.

“While politically minded, I am not overly patriotic,” she explains. Yet during the 2008 campaign, “my two daughters, partner, and I ate every meal in our house on Obama placemats [that were] plastic-coated, plate-sized paper rectangles with an image of his face framed by colors of the flag.”

By making such a bourgeois purchase, LeSavoy committed an act of capitalist apostasy, but it was in what she earnestly believed was a good cause. While “this mealtime ritual of American allegiance was odd for me,” she found strength in the act of looking “at the image of his face each day and [believing] that he really could be the change in America.”

To be sure, she continues, that faith has been sorely tested. She describes herself as “jaded” in 2012 as Obama stood for reelection, because some of his promises weren’t fulfilled. And yet, she proudly recalls, “I did not waver. I dug into our old dining room cupboards, and found our worn but resilient Obama placemats.”

Those sacred totems were restored to their proper place in the dining room, where LeSavoy, her daughters, and her partner could take strength from the visage of the Dear Leader . . .

“Firearm possession should be banned in America; president Obama can orchestrate this directive,” insists LeSavoy – who somehow obtained a doctorate degree without learning even the rudiments of constitutional law. . .Obama’s presidency “can be remembered as a remarkable turn in United States history where a progressive leader forever changed the landscape under which we live and work,” LeSavoy exults in giddy ignorance of the significance of her mixed metaphor

Ironically, progressives justify the absence of conservatives from academia on the ground that conservatives are disqualified by their stupidity. “Robert Brandon, chair of the Duke University Philosophy Department, gives this explanation of why faculties at U.S. universities usually lean to the political left: ‘We try to hire the best, smartest people available. If … stupid people are generally conservative, then there are lots of conservatives we will never hire.'” But Republicans actually have a slightly higher average IQ than Democrats.

Progressives also falsely claim that Republicans are scarce in academia because they are “anti-science.” Most jobs in academia have nothing to do with science, but this bogus rationale gets invoked even by liberal English instructors like Cornell’s Kenneth McClane.

Some progressives are themselves hostile to (and ignorant of) scientific advances. The agronomist Norman Borlaug, who pioneered the Green Revolution, saved perhaps a billion lives in the Third World by developing high-yield, disease-resistant crops through biotechnology. For this, he received the Nobel Peace Prize, the Presidential Medal of Freedom, and the Congressional Medal of Honor. For this, he was smeared in the liberal magazine The Nation, which has an irrational phobia of biotechnology and genetic engineering, as being “the biggest killer of all.” 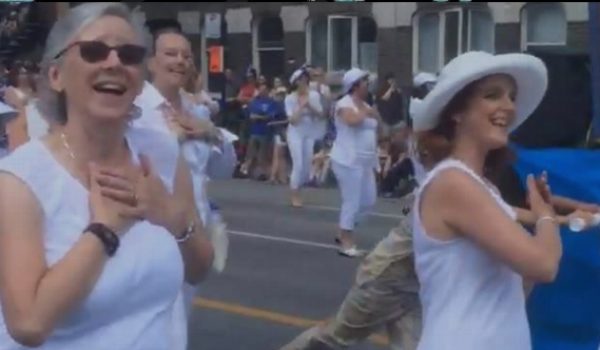 College president apologizes for ‘shock photo’ of him doing THIS
Next Post
U.S. embassy in Libya urged Hillary NOT to blame Benghazi attacks on video