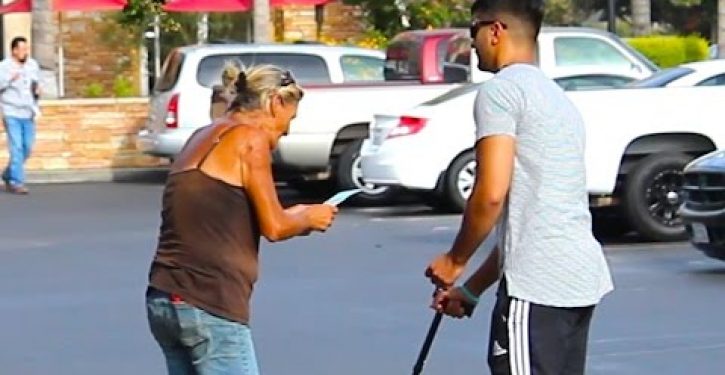 The bottom line of this morality play appears to be that rich people are thieves, while poor — even homeless — people are honest as the day is long. From a purely empirical standpoint, I call shenanigans, partly based on the fortuitousness of the sample (it is not genuinely randomized), the sample size (minuscule), and the possibility of editing bias to permit this “social experiment” to reach the desired conclusion.

Having said that, the footage by videographer Jag Singh, if authentic, reveals that there are people among us so devoid of scruples that they would steal from a blind man.

Here’s the back story. Singh, wearing dark glasses and holding a white cane, approached strangers in Modesto, Calif., and asked them to confirm whether a lottery ticket he was holding was a $500 winner. To add a little politics to the mix, Singh visited both rich and poor neighborhoods, starting with the rich.

The first man he approaches examines the ticket and wordlessly walks away with it. The second individual lies, claiming the ticket is not a winner and then pockets it.

Next comes homeless people who … well, you can guess what happens.

It would be nice to think that the bit is staged, and that there is no one so base that he would rob a blind man. Then again, if Singh really wanted to test his theory, he might try the test on some Americans who are verifiably rich, even if they protest otherwise. Wouldn’t you be interested to know how Hillary Clinton fared when confronted with this challenge?

Did you hear the one about David Cameron and a pig carcass?
Next Post
Have you noticed blue strips painted on curbs in your community?