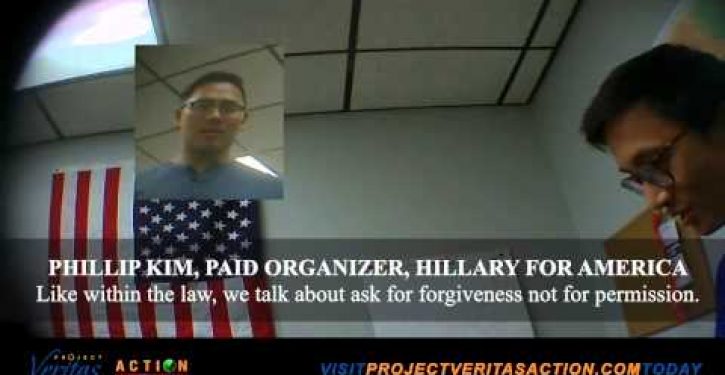 James O’Keefe of Project Veritas has struck again. The target of his latest undercover investigation is Clinton campaign staffers and volunteers in Nevada, who are captured on video violating — in most cause knowingly — the state’s voter registration laws.

Much of the footage appears damning. At one point, Christina Gupana, a Las Vegas attorney involved in the campaign’s statewide effort to register new voters, tells an audience of presumably volunteers, “Do whatever you can. Whatever you can get away with, just do it, until you get kicked out totally.”

But the real smoking gun comes roughly a minute in. The footage shows Phillip Kim, a paid organizer for Hillary for America telling a prospective voter:

So you are center right or center left? I would say Hillary is your girl. You should go for a Democrat. But I can’t tell you to do one or the other; that’s not my job. I’ll let you decide.

Several other workers are captured on video make similarly incriminating statements, which are openly in defiance of Nevada statue — NV Rev Stat § 293.505 (2013) — which follows:

10. A county clerk, field registrar, employee of a voter registration agency or person assisting a voter pursuant to subsection 13 of NRS 293.5235 shall not:

(a) Solicit a vote for or against a particular question or candidate;

(b) Speak to a voter on the subject of marking his or her ballot for or against a particular question or candidate; or

(c) Distribute any petition or other material concerning a candidate or question which will be on the ballot for the ensuing election, while registering an elector.

The statute goes on to specify that violation of this law is a felony.

Tweet of the Day: On eve of 9/11, rainbow appears over World Trade Center
Next Post
Cartoon of the Day: Remembering 9/11