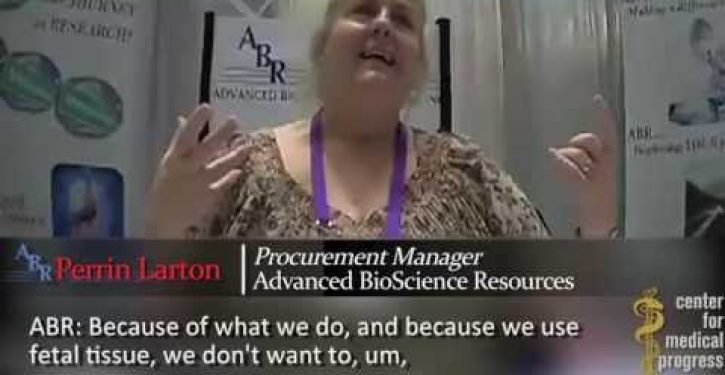 Fetal harvesters in Planned Parenthood clinics sometimes take and dissect what is apparently a live and fully intact fetus when it drops out of the womb, a procurement manager for a fetal tissue harvesting company says in the ninth video released Tuesday by the Center for Medical Progress.

“I literally have had women come in and they’ll go in the O.R. and they’re back out in 3 minutes, and I’m going, ‘What’s going on?’” Perrin Larton, procurement manager at Advanced Bioscience Resources says in the video to undercover actors posing as potential buyers. “Oh yeah, the fetus was already in the vaginal canal whenever we put her in the stirrups, it just fell out.”

Larton manages the technicians responsible for procuring the desired fetal tissue from clinics, such as Planned Parenthood. Their goal is to get clean, intact and fresh tissue for researchers, so their ability to procure tissue is limited by the abortion procedure doctors use in each case.

Doctors sometimes use a drug called Digoxin (also used to treat heart failure and rhythm problems) to kill the fetus in late term cases, before removing it from the womb. These fetuses are useless for research.

Larton tells the fake buyers she’s been in the business so long she can tell if a fetus was killed with Digoxin or not. “It has a smell,” she says. “It’s just, it’s not right. It’s kind of icky.”

In an apparently ideal case for fetal tissue harvesters and researchers, women are so dilated for the abortion procedure that the fetus is delivered intact and alive. Such cases could be considered an illegal partial-birth abortion.

“The whole point is not to have live birth,” Larton says, but adds they’re sometimes unavoidable. ”If they’ve had a lot of births, then that’s kind of what happens,” she says. “But most of the time it is not intact.”

“The abdomen is always ripped open,” Larton says. “The organs, everything will get, just get ripped up.”

“Whenever we have a smooth portion of liver we think that’s good, because most of the time, the instruments, they go in to pull and it’s just whatever presents first. And unfortunately I don’t know why, a lot of times the abdomen presents first. And they just go in and start pulling, and they’re not trying to –”

One of the fake buyers interjects: “They don’t have my interests in mind.”

“Or mine,” Larton replies, laughing. “That really pisses me off.”

The Center for Medical Progress has released eight other videos, which are a combination of undercover footage and cuts of an extended interview with a whistleblower who used to work in the clinics.