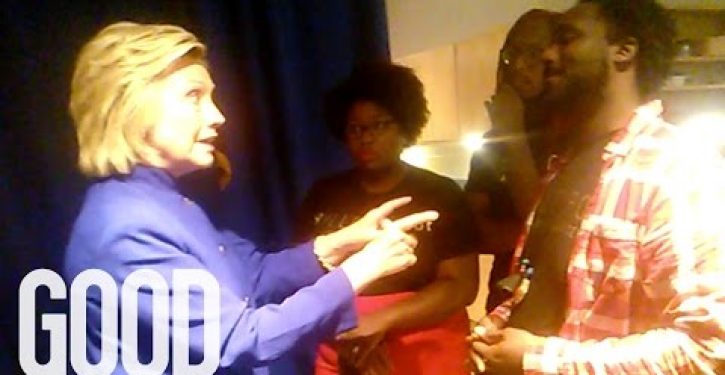 A dialog that is beginning to gain traction between Hillary Clinton and the Boston chapter of #BlackLivesMatter has emerged on YouTube. The video came out yesterday but reportedly took place on Aug. 11.

In it, a softspoken black man tells the Democratic presidential hopeful, “If you won’t tell black people what we need to do, then we won’t tell you all what you need to do.” After a brief effort by Clinton to clarify her position (read: ingratiate herself with the group), her unidentified interlocutor continues:

This is and has always been a white problem [INAUDIBLE]. There’s not much that we can do to stop the violence against us.

There is some cross-talk, after which Clinton responds:

Respectfully, if that is your position then I will talk only to white people about how we are going to deal with the very real problems.

Clinton’s audience — in the video and in the comments section following it at YouTube — takes offense at what they perceive as her baring her fangs.

She probably didn’t intend her “solution” or the tone in which she presented it to come out exactly as did, but it is clear she ticked off members of a group whose support for better or worse she needs in order to clinch the Democratic nomination, if not win the election. One YouTube commenter, Sunny Black, writes:

What a nasty woman. What a racist piece of sh*t. African Americans do you see her attitude? F*ck her! Vote Trump! Even this homo group understand she is full of sh*t. [Edited]

Maybe the problem for Hillary is not who she aspires to become but who she is.

Islamic State’s answer to ‘Mein Kampf’ uncovered; promises final solution by 2020
Next Post
She modeled for Maxim and partied with Hollywood actors before finding God