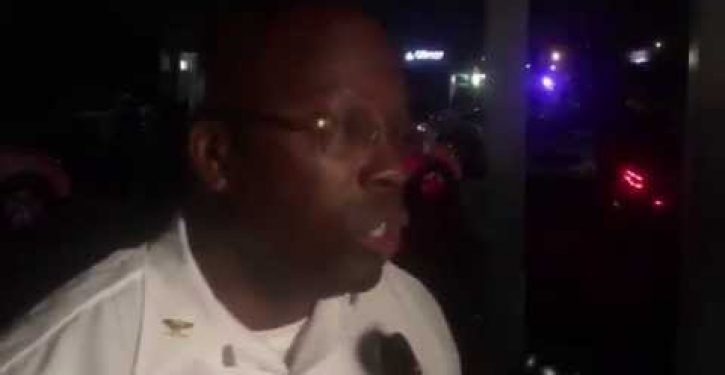 Video captured Sunday night shows acting Ferguson Police Chief Andre Anderson telling reporters that police “just want to be as patient as possible” while gunfire is heard in the background.

“We’re trying to work with the community, we’re explaining to them their rights, and we just want to be as patient as possible,” Anderson says, as a series of shots can be heard crackling in the background. The interview abruptly cuts off as the cameraman turns towards the shots and some people who appear to be fleeing from them.

Ferguson saw widespread protests on Sunday as people gathered on the one-year anniversary of the shooting death of Michael Brown at the hands of police officer Darren Wilson. Though the protests were originally peaceful, as night fell looting and other acts of violence began once again. One 20-year-old man was hospitalized after opening fire on police and sustaining a gunshot wound when they returned fire.

Anderson has been the interim police chief of Ferguson for less than a month. He was appointed to try to reform the department, which has suffered a loss of public confidence not only due to the Michael Brown shooting but also a Department of Justice report that claimed widespread racial bias within the department.