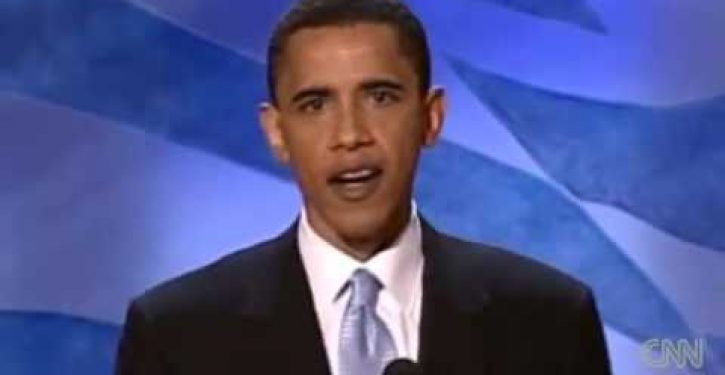 In his historic keynote speech at the Democratic National Convention in 2004, Barack Obama proclaimed, “There is not a black America and a white America and Latino America and Asian America.” Like hell there isn’t! Even serious observers on the left acknowledge that “the divisions [in the nation] have gotten so much worse … since the beginning of Obama’s presidency … that it’s the most famous Obama line you never hear anymore.”

But Obama never believed this piffle about a racially unified nation himself. In an interview in June, he mused on how racism is “part of our DNA.” But actions speak louder than words, and what deed could be more revealing than the president’s having taken to his bosom one of the biggest race hucksters living, in his BFF Al Sharpton?

In any case, the lie he told to elevate his brand, ultimately paving the way for a (successful) White House bid was just the beginning. Another lofty stated ambition of his was to run the “most transparent administration in history.” A lengthy — and charitable — article in the Washington Post this past March assesses that pledge and finds that “the Obama administration’s record … suggests progress toward transparency, but it arguably falls short of what Obama promised.”

Unbeknown to most Americans, Obama’s racial bean counters are furiously mining data on their health, home loans, credit cards, places of work, neighborhoods, even how their kids are disciplined in school — all to document “inequalities” between minorities and whites.

This Orwellian-style stockpile of statistics includes a vast and permanent network of discrimination databases, which Obama already is using to make “disparate impact” cases against: banks that don’t make enough prime loans to minorities; schools that suspend too many blacks; cities that don’t offer enough Section 8 and other low-income housing for minorities; and employers who turn down African-Americans for jobs due to criminal backgrounds.

Before launching into a detailed analysis, Sperry offers a very faint ray of hope to Obama’s dwindling army of acolytes, writing that Obama “wants the databases operational before he leaves office, and much of the data in them will be posted online.” Transparency at last!

The rest of the piece, which is a must-read, details the many ways in which Big Brother will be keeping tabs on every aspect of your personal life, from where you live (via the Affirmatively Furthering Fair Housing database), where you work (via the Office of Minority and Women Inclusion), where you send your kids to school (via the Civil Rights Data Collection project) and more. And to think, all of this comes from a guy so secretive that he has never released his college transcripts.

The bottom line, according to Sperry:

The first black president, quite brilliantly, has built a quasi-reparations infrastructure perpetually fed by racial data that will outlast his administration.