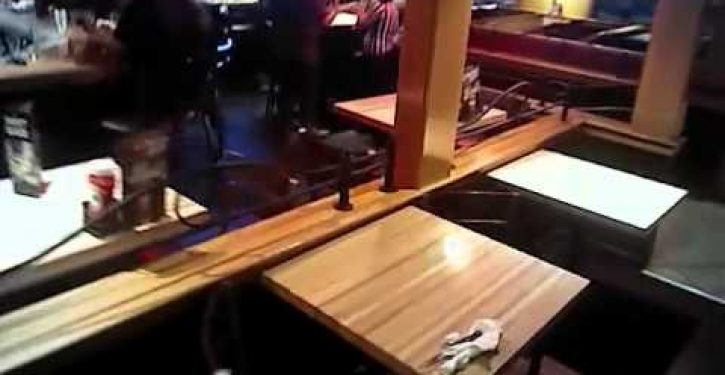 New body camera footage out of Texas shows just how quickly police interactions can turn violent and gives a window into the kind of incidents we will be viewing online as police departments across the country adopt the new technology.

The two officers walk into an Applebee’s and go to the bathroom where Bushey is washing his hands. According to Texas ABC affiliate KLTV, Bushey, who was dressed in a black t-shirt, black cap, and tan shorts, fit the description of a suspect in a theft at a Wal-Mart.

In the video, Bushey can be heard asking, “What do you need?” Green tells him he’s a suspect in a theft case and he needs to come outside. Bushey stands there silently.

They walk outside the restaurant and Griffin asks Bushey, ”You have any ID on you, sir?”

At this point, Bushey pulls out what appears to be a handgun.

“Gun! Gun! Gun!” Griffin yells, and the officers open fire. A taser hits the man, and then a wall of bullets.

Green’s body camera shows his perspective from a camera on his glasses.

WARNING: These videos are extremely graphic.

The gun turned out to be a realistic-looking BB gun.

“Although the initial investigation has revealed that the gun the suspect brandished was a BB gun designed to look like a 9mm handgun, in the rapidly developing situation the officers took appropriate defensive measures in using deadly force against the suspect to stop the threat,” Palestine Police Chief Mike Alexander told KETK.

Star Trek’s George Takei has some ugly words for one Supreme Court justice
Next Post
Cartoon of the Day: A Greek tragedy