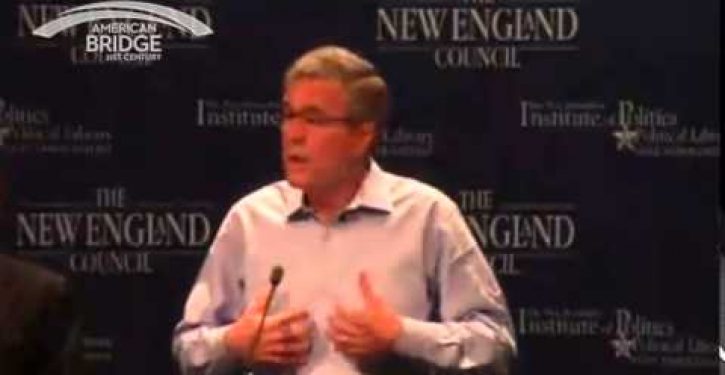 Is Jeb Bush now a global warming crusader, or is this just a liberal attempt to smear his conservative credentials?

Jeb Bush told a crowd in New Hampshire Friday that the “climate is changing and I am concerned about that.” He added that the U.S. must be “cognizant of the fact that we have this climate change issue and we need to work with the rest of the world to negotiate a way to reduce carbon emissions.”

Environmentalists with the group NextGen Climate Action were quick to praise Bush for his statement, saying that he “demonstrated leadership today on the issue of climate change — distancing himself from the other Republican presidential hopefuls and demonstrating why climate change doesn’t have to be a partisan issue.”

The organization left out a crucial part of Bush’s speech out of their praise, where he said regulations to address global warming should not harm the economy. In his remarks, Bush also embraced the U.S. oil and natural gas boom currently going on throughout the country, adding:

NextGen, which was founded by liberal billionaire Tom Steyer, plans to make global warming a major issue in the 2016 presidential election. The group failed to do so in 2014 and lost 4 out of 7 Senate races where it backed Democrats. But this time around, Steyer’s group seems to be trying undercut Bush’s conservative credentials.

“In the coming weeks, we urge Jeb Bush to outline his specific plan to reduce carbon emissions and tackle the greatest challenge of our generation,” NextGen told reporters in an emailed statement. “Providing strong solutions to reduce carbon emissions will not only mitigate the impacts of climate change but also strengthen our economy and create good-paying jobs across the country.”

Praising Bush for his remarks on reducing CO2 emissions makes sense for NextGen. A new CNN poll puts Bush in the lead among Republican presidential hopefuls, beating out Wisconsin Gov. Scott Walker by 5 percentage points. As of right now, he’s the biggest threat to a Hillary Clinton, or Democratic in general, victory in 2016.

Clinton, the only declared Democratic candidate, has said she would protect the regulations President Obama has put in place to cut U.S. CO2 emissions. These regulations are heavily opposed by Republicans. Bush, himself, has said he doesn’t want to hurt America’s manufacturing base and international competitiveness by imposing draconian regulations.