The Washington Times reported on Monday that President Obama has signaled his approval of a concept for cutting military pensions for future recruits.

The issue is more complex than simply cutting pensions, and that must be noted.  The new proposal, from a commission that has been studying ways to overhaul the military’s pension and benefits system, would enable service members to leave the military with some benefits, before the 20-year retirement point.  They can’t do that under the current system.  Unless they stay to 20, they don’t accrue any “transportable” benefits.  The overhaul proposal would basically exchange some of the current pension index for “transportable” benefits a soldier could take with him after as little as four years.

Nevertheless, the bottom line is that retirees would come away with pensions that are 20% smaller.  The proposal would also end matching contributions from the military to a service member’s thrift savings plan after the 20-year mark, making it less attractive to stay on past 20.

The study commission proposes significant changes to the military’s Tricare medical insurance program as well, ultimately privatizing it and quadrupling the premiums paid by retirees and families.  As some critics point out, the suggested changes would have their most significant impact on disabled veterans.  Their base pensions would be lower, but the premium contributions for their special medical care needs would be higher.

There’s a lot to hash out (see here and here, if you’re interested), and it’s by no means unfair in principle to suggest overhauling the system.  But my real purpose here is not to argue the details of the pension and benefits system.  It’s to highlight the contrast between the microscope that military pensions and benefits are put under, and the hand-wave given to the much – much – larger expenditures on other programs.

The graph below provides a visual comparison.  I selected the programs for comparison as follows:

1.  Social Security.  There are two key reasons for doing this comparison.  One is that the cost-of-living adjustments made to Social Security drive the ones made to military pensions.  But the other is that Obama has – by executive departmental memo – arranged for millions of illegal aliens to become eligible to collect Social Security, many within a very few years from now.

The magnificent irresponsibility with which this unplanned burden has been added to the Social Security system stands in stark contrast to the penny-pinching approach of the president and Congress to military benefits.  Every dollar of spending on military benefits is subjected to endless second-guessing.  And yet military benefits are a much smaller portion of federal spending.

2.  Federal civilian pensions.  When was the last time you even thought about federal worker pensions?  Exactly.  They aren’t the political football that military pensions invariably become.  And there’s nothing wrong with having them, or with their terms being favorable.

Yet we spend more than three times as much every year on federal civilian pensions as on military pensions.  (It’s worth noting, moreover, that there is no 20-year cap on federal agencies making matching contributions to their civilian employees’ thrift savings plans, which are similar to 401(k)s.  It’s not clear why that limitation is proposed for military members.)

3.  The Earned Income Tax Credit.  This is the mechanism by which amnestied illegals will be able to receive free money from the IRS almost immediately.  No one earns the EITC; it’s welfare that comes from filing your tax return on the income you did earn.  You end up receiving from the taxpayers money you didn’t earn, in addition to getting back everything you paid in federal income tax withholding.  (See more here.)

Over the past decade, we’ve spent more on the EITC handout than on military pensions.

4.  EITC fraud/overpayments.  But it’s more than that.  Between 21 and 25% of EITC payouts each year are awarded improperly, according to the federal government’s own analysis.  (See here as well.)

From 2005-2014, improper EITC payments amounted to more than $146 billion.  (In fact, if we add that amount to the fraud in the Social Security disability system over the same period, which totaled about $210 billion, the grand total of the fraud alone, in just those two programs, is $356 billion, compared to the $483 billion spent over those ten years on military pensions.)

EITC is the form of tax-system welfare to which the Obama administration plans to admit amnestied illegals who start filing next year.  Importing illegals on this basis increases the net cost to the taxpayer, since EITC is a net cost to the treasury, not just a matter of foregoing revenue.

Obama has been satisfied to ignore this, bypassing Congress to give illegals amnesty and get them into the system.

Note:  The data for the graphic were compiled from various sources, including: U.S. federal agencies; the Tax Policy Foundation; the Mercatus Center; the Congressional Budget Office; and usfederalbudget.us.  See also links in the text for some of the data points used. 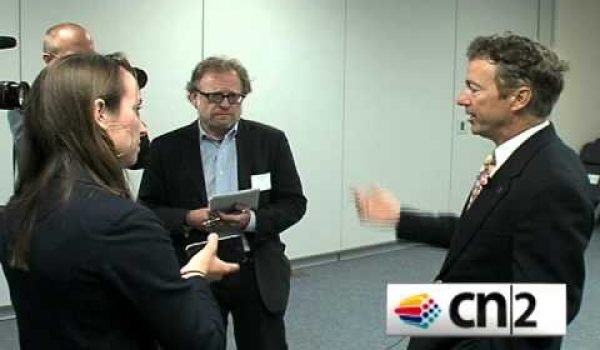 I’m confused by Rand Paul’s classical definition of what rights actually are
Next Post
Inevitable: CA lawmaker wants only ‘smart guns’ legal for civilian use