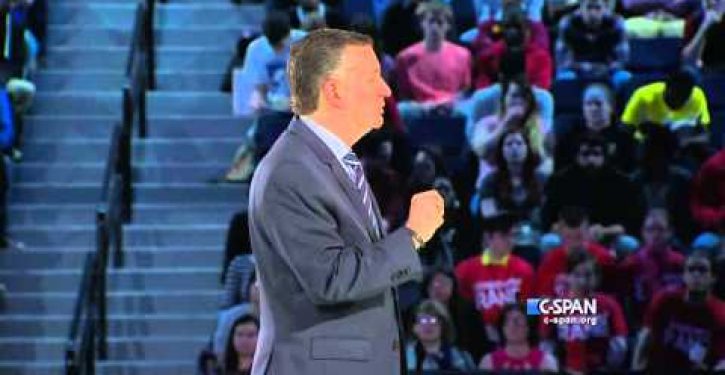 I admit to having little patience with the antipathy toward Ted Cruz from some quarters on the right.  It’s never quite clear what their problem with Cruz is, other than that they think (a) he’s somehow less of a “unity” candidate than – well, it’s not clear who, exactly; and (b) it’s alarming or off-putting that he actually fights, as opposed to always saying, like Mitch McConnell or John Boehner, that now isn’t the right time (and then the right time never comes).

The old-consensus right spooks itself regularly about genuine limited-government conservatives.  That’s much of what I see at work in the legacy right’s uneasiness with Cruz.  But it’s not all.

I can’t forget pundits like Charles Krauthammer and Brit Hume, for example, in the fall of 2013, accusing Cruz of the most irresponsible grandstanding when he pulled the not-quite-a-filibuster move to try and rally GOP opposition against Obamacare in the Senate.  I think this is because Krauthammer and Hume could see what the outcome would be; that is, Republicans on the Hill having to actively take the side of Obamacare and the Democrats: negotiate and sign their surrender in the full glare of the spotlight, rather than getting to pretend it didn’t happen.  Cruz’s not-quite-a-filibuster stunt made their exposure inevitable.

But the truth is, that’s not a bad thing.  In hindsight, it’s not even a neutral, we-can-get-past-this sort of thing.  It’s an absolutely good thing.  Republicans have been negotiating surrender in back alleys for years, and what has it gotten the American people?  Nothing but worse government, and worse problems caused by government.

At some point, the people have to face reality.  Old-consensus Republicanism – even, in some ways, old-consensus conservatism – is itself a big part of our problem today.

For people who feel alarmed at the idea of having to revisit some of our most important political assumptions, Cruz’s willingness to outline the real problems and address them is off-putting.

I don’t think anyone, really, has an articulable idea of what Cruz would do that’s so bad.  And I mean that about his critics on both the left and the right.  Rather, there are people who just have a visceral resistance to the thought of having to pay so much attention to politics and policy.  It sounds to them like a whole lot of unsavory, unpleasant fighting.

This is where the Ted Cruz conversation is our national political conversation.  Because we don’t have the luxury today of not having that fight.  There are no more Band-Aids to deploy.  We either have the fight, or we all go down.

For me, the question is which candidate is the one who will bear the standard most effectively in that effort.  I don’t think anyone will do it perfectly.  My top candidates are Rick Perry, Ted Cruz, and Scott Walker, and I don’t have a set order in mind for that short list.  Each one brings something a little different, and a distinctive approach.

Rick Perry has a lengthy record of limited-government bona fides on economic regulation, and probably brings the most credible and reassuring persona when it comes to national security.  He impressed a lot of people across the country with his actions to secure Texas against the impact of Obama’s border influx last summer.

Ted Cruz, who never comes off as other than mild and cheerful, comes across also as the deepest and most agile thinker on political philosophy as it applies to policy.  He is fearless about challenging topics and scary political fights.  Yet it’s laughable when the MSM try to depict him as shrill, overamped, or wild-eyed, because he just isn’t that guy.

Scott Walker has a record of getting “impossible” things done against entrenched leftist strongholds, and disciplines himself to strike the right note – keep focused and positive – on virtually every domestic policy topic he has spoken about.  He’s very good at not going down rhetorical rat-holes, remaining patient and polite with the media, but not taking bait.  And he obviously knows how to stay a difficult course.

In different ways, I think Walker and Cruz both point us to the reality that we can’t just vote in a good guy to correct our course on autopilot, and then put our feet up.  To my eyes, Perry has less of that let’s-face-reality quality – and that’s not because he wouldn’t or couldn’t face reality, but because he does come from among the ranks of old-consensus Republicanism.  I actually think Perry would shake things up, at least from the rarefied perspective of those inside the Capital Beltway.  But Cruz and Walker are more readily associated with the prospect of a shake-up.

And of the three of them, Ted Cruz is the one whom voters correctly recognize as the “challenge” candidate: the one they can’t pretend will enable them to cast a ballot and then go back to sleep.  That’s why the Ted Cruz conversation is the conversation about our national future, and the fate of the world.  Because the truth is, no matter whom we elect, we will be committing civilizational suicide if we just go back to sleep, trusting in inertia and a few voodoo incantations from old-consensus politics to carry us through.

The Ted Cruz challenge is going to tell us who we are, even if he doesn’t win out in the primaries.  Let the great grist mill commence grinding.

UPDATE:  Video of the complete announcement speech from Monday.