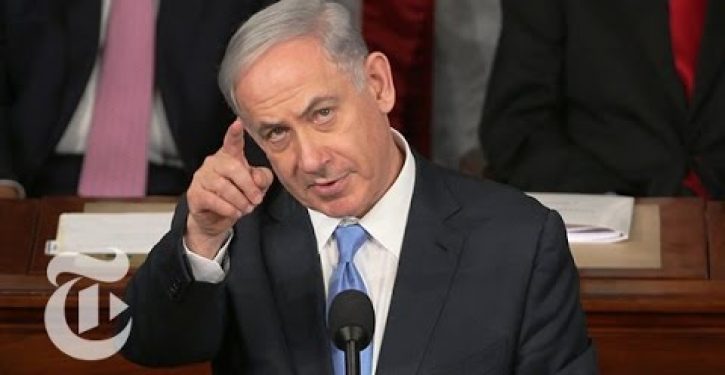 Full transcript of the speech here. Video below.

The main thing Benjamin Netanyahu needed to do today – the minimum requirement he had to meet – was establish that the U.S. Congress stands behind Israel, even if Israel has to act alone to defend herself from the existential threat of a radical, predatory Iran.

I wrote before the speech about the meaning of the people’s support to Israel and Israel’s freedom of action.  In effect, a robust and unified show of that support clarifies to the world that on this matter, and at this moment, at least, Obama doesn’t speak for his people.  Americans do not approve of negotiating an on-ramp for Iran to either nuclear armament or an effective takeover of the Middle East.

Bibi got that robust and unified show of support.  When he said, “If Israel has to stand alone, Israel will stand,” the gallery erupted in the most thunderous applause of the entire speech, and our senators and representatives surged to their feet.

Netanyahu could have gotten that response with a speech only a tenth as good – because he and Israel do have the support of the American people.  That, frankly, was never in doubt.

But he did something more than merely show up to participate in a ritual affirmation.  The affirmation – which certainly didn’t come off as ritual in tone – was one of the key aspects of his speech.  It’s what he came for and what he had to take home.

The other key aspect is what he didn’t have to do, but did.  The measure of greatness is demonstrated in it.  He gave a statesman’s speech – a better-than-necessary speech – in order to build a case for something better than Israel having to stand alone.

Netanyahu didn’t just build the case for why Iran must be stopped.  He built the case for why we, collectively, have more choices than “a” deal or a military attack.  We have the choice of a better deal: a good deal, an effective deal, a deal that deters and retards radical Iran’s current career.

Integral to that case was his point that negotiations with Iran should be strategic in nature, rather than tactical, or focused narrowly on the single issue of the nuclear program.  Iran should have to change her overall behavior in order to win the lifting of restrictions, and admission to the community of nations.

These points are nothing new; sanctions on Iran, imposed by both the United States and the UN, have been broadly focused for many years now.  They have addressed Iran’s sponsorship of terrorism and proliferation of arms to the world’s worst actors.  Netanyahu’s speech listed reasons why the same concerns and logic apply today more than ever.

With exceptional grace, he managed to make his case without pointing out that it used to be America whose president thought of these things.

There is plenty else that’s important to say about Bibi’s speech, and I know others are busy saying it.  I would like to suggest that if you remember just those two points in the speech – Bibi saying “Israel will stand alone,” to the cheering applause of America, and Bibi urging the world to seek “a better deal” – you will remember what matters most.

(The Netanyahu speech portion starts around the 22:00 mark in this video.)