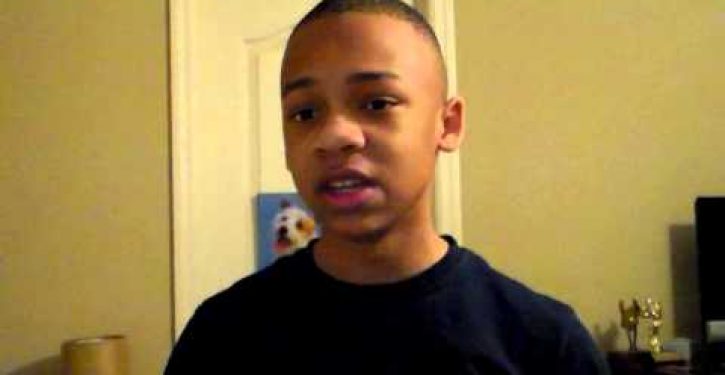 Much of America had a new adopted son when Georgia pre-teen CJ Pearson’s political video went viral this week.  My colleague Howard Portnoy noted that Barack Obama probably wouldn’t claim him – but I think millions of other Americans would.

I hope that one day people will get enough guts to speak out against your downright hatred for this nation.

So it shouldn’t surprise anyone that on Friday, young Mr. Pearson found himself locked out of his personal Facebook account.  (Emphasis added)

On Friday, C.J. Pearson, a 12-year-old conservative from Georgia who posted a viral video supporting Rudy Giuliani, discovered that his personal Facebook page was locked. In an exclusive interview with Examiner.com on Saturday, Pearson said he received a message from someone about 6 a.m. Friday. That’s when he learned his account and page had been locked for “suspicious activity.”

He jumped through all of Facebook’s hoops, but wasn’t able to recover his account. So he created a new profile to take its place. His public page was not affected, he said, however, he can no longer administer the page. Fortunately, he said, a friend is helping post links to that page.

As is so often the case in these situations, Facebook did not respond to his requests for help. Nor would they tell him what the alleged suspicious activity was. We reached out to Facebook, but the social media giant has so far refused to respond to our request for comments.

This is far from the first time Facebook has suspended accounts after conservative users have criticized left-wing politicians or causes, especially Obama or his administration.  In October 2014, Veritas video maven James O’Keefe found his page deactivated and inaccessible:

O’Keefe was trending on Facebook Thursday after his group Project Veritas’ latest video captured Colorado-based Greenpeace official Christen Topping describing a “ghetto” neighborhood in Aurora where ballots could be found in garbage cans for use by those seeking to commit voter fraud.

O’Keefe reported that within 90 seconds of his discussing this problem live, with a “prominent national reporter,” his account access was miraculously restored.

And in January 2013, the popular Chicks on the Right bloggers found themselves locked out of their account, after criticizing the Obama administration (and in particular, then-spokesman Jay Carney), supposedly for having posted material that violated Facebook’s terms of use.  Facebook later acknowledged that there had been no violation, and apologized for Chicks on the Right having been “incorrectly warned.”

Interestingly, one of the Chicks on the Right, who goes by Mockarena, posted afterward that she got assistance from an actual conservative – and supporter of their blog – in the Facebook organization:

“We received an email from a representative at Facebook to a) apologize and b) offer her help at any time should we be faced with a similar problem again,” Mockarena wrote. “She also happens to be a supporter of our page! So contrary to popular belief, there are friendly conservatives who WORK for Facebook.”

We can hope that young CJ Pearson will make a similarly encouraging discovery as he deals with this latest example of Facebook locking out a high-profile conservative user.  We wouldn’t want a smart 12-year-old to end up sour and cynical about bias in social media.