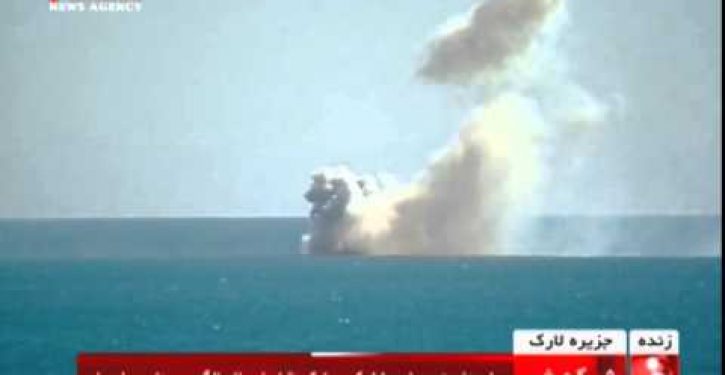 Iran is her own worst enemy, when it comes to making a case for the Iranian military threat to American forces.  That’s particularly so in the maritime realm.

For whatever reason, Iran keeps putting out really stupid videos, in which the action is obviously faked by editing, or her naval forces are doing embarrassingly rudimentary or ridiculous things.

Iran’s latest essay in documenting magical naval operations does nothing to improve that trend.  Unfortunately, the Iranian penchant for Brothers Grimm-type naval messaging could make us dangerously complacent about the threat Iran does pose to our carriers.  That threat won’t involve flashy naval maneuvers.  But it could be deadly – and, at a time of Iran’s choosing, operationally devastating, given the conditions of extreme lack in which our forces are deployed today.

The latest absurd video from Iran (see below) makes a useful starting point.  Most people probably understand that towing a replica of an aircraft carrier out, and shooting at it while it doesn’t move, doesn’t fight back, and isn’t protected by Aegis cruiser or destroyer escorts, is a display of something, perhaps, but not of naval power.

Footage of a short-range ballistic missile arcing over the water, until some kind of probably unrelated explosion at sea is spliced to it, is fakery too obvious to require commentary.  Iran’s videos of Holy Naval Heroics remind me of nothing so much as my little nephew, who will be six in August, running around with his toy B-52 pretending it’s a “Super Hornet!”  (He goes to high warble – literally – if his aunt comes after him with one of his toy F-16s.)

The U.S. naval forces spokesman in the Gulf can be excused for being a bit dismissive about all this:

Cmdr. Kevin Stephens, the spokesman for the U.S. Navy’s 5th Fleet in Bahrain, said the Iranian naval exercises began a few days ago and have had no effect on maritime traffic.

Stephens said the Americans were monitoring the drills, but downplayed the simulated attack on the carrier, saying the U.S. military was “not concerned about this exercise.”

“We’re quite confident of our naval forces’ ability to defend themselves,” he said. “It seems they’ve attempted to destroy the equivalent of a Hollywood movie set.”

But peel back the kindergarten-quality humbug the Iranians push with their ill-advised videos, and it turns out that there is a threat, and we do see some of it in the video from the latest Iranian exercise.  The Iranian navy is, in fact, capable of putting one of our carriers out of action.

It won’t be done by firing anti-ship cruise missiles at the carrier, however.  At least, it won’t be done solely by that means.  The capability Iran has is of combining multiple threats to distract and harass the carrier, and her escort(s), in a way that could open a window for a basically suicidal, but effective, attack on the carrier’s propulsion system and/or keel.

Briefly, the combination of tactics would work best just at the Persian Gulf-side opening from the Strait of Hormuz.  It would involve running high-speed boats in swarms around the carrier and escort(s) to create an environment of distraction (the carrier would probably have only one dedicated escort, so I will refer from here on to a single escort).  Simultaneously, Iran could increase the level of distraction by spinning up the fire control radar for coastal anti-ship cruise missiles deployed to the coastline in the immediate vicinity.

The Iranians could use the small boats to lay mines (see video) – or, quite possibly, dummy mines – ahead of and behind the carrier and escort, causing them to slow down and limit their maneuvering.  Iranian boats that came too close would certainly risk fire from deck-mounted chain guns on the escort and carrier, but if Iran is actually launching this attack, that obviously won’t be a show-stopper.  Laying the mines is a belligerent act in itself.  Iran would be going for broke.

If neither ship has a helicopter aloft, a ready helo pair can probably be launched pretty quickly, and increase the menace to the small boats.  But in the vulnerable area we’re talking about, Iran could also target the helos, and very possibly bring one or both down, with surface-to-air weapons fired from shore, or (more likely) from the small boats.  The timing of a helo presence isn’t as important, in a tactical sense, as the vulnerability of it to a combined threat from both land and sea.

If Iran launches coastal defense cruise missiles, the ships have a good chance of avoiding most (perhaps all) of them with evasion or shootdown. Iran’s anti-ship cruise missiles are sea-skimmers, which does mean that self-defense requires very rapid reaction with limited advance tracking for each missile (as little as 30-60 seconds).  Facing a barrage, the ships’ crews would be under immense stress deploying countermeasures and trying to shoot down the missiles they could.

There’s a limit to how many the Iranians can fire in a salvo (call it 8-12, for our purposes here).  But distracting the two ships with mines, and small boats, and cruise missiles, in a restricted space, all at the same time, would be an effective way of keeping their attention off of what’s going on underwater – where only the cruiser/destroyer escort has sensors, and where Iran has a very good chance of sneaking a couple of Ghadir mini-submarines in behind the carrier, using the ambient shipping noise as acoustic cover.

The carrier will be slowed down, making a relatively easy target for the 53-cm torpedoes the mini-subs would each have two of.  Iran’s goal would be to get all the torpedoes into the propulsion housing down by the keel.

The escort ship will be alerted the moment the first torpedo is fired, and would have a reasonable shot at taking out both mini-subs, if it’s in position to do so.  But the mini-subs would still be able to deliver their ordnance, and that’s what matters.  Iran has enough of them to try sneaking in three or four, in fact, although with each additional torpedo fired, the likelihood of the mini-subs accurately delivering all of their load-outs declines further.

Bottom line: Iran is capable of putting a carrier out of action.  Take out the propulsion mechanism, and the carrier can’t perform her essential function: making 35 knots of wind over the flight deck, and recovering aircraft.

The whole interaction could be brought off in 15-20 minutes, if Iran has been able to plan and stage her assets beforehand.

In the past 35 years, the ordinary person’s reaction to the scenario I’ve outlined here would have been to think, “Iran will never try that.  Even if Iran could do it, the U.S. would retaliate with too much force.  It’s a stupid move by Iran.”

But ask yourself: what would Barack Obama actually do if Iran attacked our carrier and put it out of action?