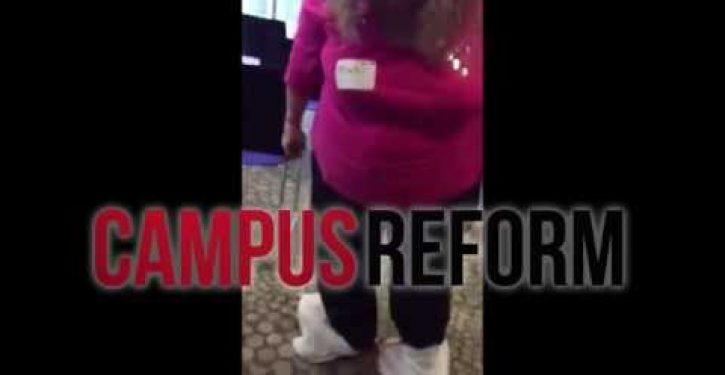 “While attending a pro-abortion celebration this past weekend,” notes Campus Reform, “the secretary for Florida’s National Organization for Women chapter was caught wearing plastic bags over her shoes in an attempt to mock Sen. Joni Ernst (R).”

The joke, in case you missed it, was that newly elected senator from Iowa — the state’s first female to serve in either house — in her GOP response to the State of the Union recalled wearing plastic bags over her shoes as a child. Her explanation, which can be viewed in the opening portion of the video below, follows:

Growing up, I had only one good pair of shoes. So on rainy school days, my mom would slip bread bags over them to keep them dry. But I was never embarrassed.

Beginning at around 0:31, Bonni Axler, the NOW officer in question, attempts to debunk Ernst’s account, claiming that “her farm received $460,000 worth of farm subsidies from the government. So she was poor?” Axler asks snidely.

Trending: Woman strips down to her skin, strolls naked through Miami airport

Axler’s challenge is based ultimately on a distortion of the facts first presented at the District Sentinel, a liberal website:

For starters, it should be noted that Joni Kay Culver (later Ernst) was born in 1970. In 1995, the year of the first subsidy payment, she was already an adult, aged 25, and living independently. This hardly casts doubt on her claims of an impoverished childhood.

7 real-life examples of asset forfeiture, an ugly practice that Loretta Lynch thinks is ‘a wonderful tool’
Next Post
TX hospital tries to pull plug on comatose 12-year-old against parents’ wishes

A surprising solution to the impeachment morass