The attack in the Golan this week, on a convoy of Hezbollah operatives and Iranian military officials, is a sign that things are going to get worse in the volatile area that encompasses southern Lebanon, Syria, northern Jordan, and northern Israel.  (See also here and here.)

Among those killed were high-ranking Iranian officials connected with Hezbollah’s use of Iranian-supplied ballistic missiles, and with Iranian Special Forces units that focus on raids and small-unit tactics.  In the words of a retired Israeli general (see first link, and below), this was a very high-level convoy, clearly preparing for serious incursions against northern Israel.

Meanwhile, we’ve reached the point in the post-Arab Spring Middle East at which many of the spin-off developments – perhaps most of them – are a consequence of the policies followed by the Obama administration.  Although there have been long-term policy failures, it’s a specific, proximate policy failure that opened the door to the current result in the Golan Heights.

Because of the strategic importance of the terrain, Iran and Hezbollah have been building infrastructure there for some time.  But their interest in the Golan skyrocketed in December.

A door opened by the Obama administration

The reason: ISIS gained a foothold there when the Yarmouk Martyrs Brigade of the Free Syrian Army “defected” from the de facto alliance with the U.S.-Arab coalition against Assad, and declared its allegiance to ISIS.  The Yarmouk Martyrs Brigade had been one of the most active rebel factions holding territory directly adjacent to the “area of separation” between Syria and Israel administered (in theory) by the UN.  In particular, it has held the southern line of confrontation with Syrian regime forces, in the transit corridor leading to the Quneitra border crossing.

That defection didn’t happen in a vacuum.  It happened because in early December, the Obama administration disclosed (through the back door), after more than two years of cooperation with the FSA, that it would not be working with them to build a defense force in Syria.

The point here is not that Obama should have stayed with the wrong allies.  The point is that passivity, lack of leadership, and ally-hopping have consequences.  Part of picking allies is shaping who they are and what expectations they have.  It starts with having common and enduring goals with those allies, which keep both sides committed.  These things matter to a responsible power, at any rate.  The Obama administration has consistently failed to exhibit signs of being one.

The failure has had a game-changing result in the Golan.  Now ISIS is there, with an entrenched infrastructure handed to it by FSA factions, and Iran can’t afford to ignore that.  Iran isn’t going to let ISIS build up a stronghold of its own on the Syrian border with Israel.

But don’t imagine that that means Iran and ISIS will be having at it.  Think Persian.  Certainly, the Iranians and Hezbollah want to be able to operate in the Golan, and attack Israel from it.  But Iran and Hezbollah don’t want to invite retaliation from Israel on southern Lebanon, where it’s important to them to protect their own stronghold.  Iran would like to get Israel shooting into Syria.

Israel has so far managed to keep that necessity limited.  Until very recently, the impression of the situation in the Golan has been that it is relatively stable: worrisome, but not unstable to the point of being an exploitable opportunity for one or more bad guys.  Iran would like to change that, in part because preoccupying the Israelis with self-defense is the key to limiting Israel’s strategic reach against Iran.  The objects of that reach include, but are not limited to, the nuclear and missile programs inside Iran.

A unique opportunity for Iran

Iran has largely been driven to this particular opportunity.  The defection of FSA factions to ISIS last month forced a new timeline.  But with Egypt clamping down on Hamas’s resources in Gaza, the importance to Iran of forcing a second front on Israel has been growing since the summer of 2014, when the IDF was able to destroy much of the Hamas infrastructure.

That said, the Golan represents a unique opportunity to pin Israel down in an ugly confrontation, because there is no moderating, order-keeping entity like Al-Sisi’s Egypt on the other side of it.  An escalating confrontation in the Golan has the potential to draw in other parties like Turkey and Saudi Arabia: not into combat, but certainly into faction-tending and political wrangling that will worsen Israel’s overall situation.

Given the broad mix of factions on the Syrian side of the dynamic, the sheer potential to promote divisions in the Arab League, and between the Arabs and Turkey, is also appetizing for the radical mullahs.  For the region’s Sunni powers, having a common concern about ISIS isn’t the same thing as having a common objective to unify around.  On the Egyptian side, the existence of “Egypt,” with a government in charge of its territory, obviates the need to think up unifying objectives: you either support the government of Egypt or you don’t.  But on the Syrian side, there are only evanescing factions and disputed territory.  It’s a tremendous opportunity to sow chaos and create a giant, cancerous sore on Israel’s northeastern border.

Where the U.S. could have averted this

The opportunity could have been forestalled by more effective U.S. policies, even as little as a few months ago.  In theory, the UN mission in the Golan, which has been there since 1974, is intended to prevent the stability problem Iran now hopes to exacerbate there.  The UN Disengagement Observer Force (UNDOF) monitors activities on either side of the armistice line from the 1973 war.  It operates a group of observation posts in the mountains, and until September 2014 had its field headquarters in the “area of separation” between the Syrian and Israeli side.

Without a serious and explicit U.S. commitment, however, the UNDOF troops in the Golan have been under increasing threat since 2011, and were overrun and forced to flee in September 2014.  (First, of course, dozens of the peacekeepers were held hostage by jihadis for more than a week.)  Although the observation posts are being manned again, the field headquarters was moved to the Israeli side in September, and has remained there, “temporarily,” ever since.  In December, the UNDOF mission was renewed for another six months by the UN Security Council, but its activities are curtailed now, and its leaders express continuing concerns about the mission’s viability.

It’s a Band-Aid about to fall off, left in place partly for show at this point, and partly to constrain Israel.  In the Israel Project update linked at the very beginning of the post, there is a link to the audio recording of a conference call with retired Israeli General Eyal Ben-Reuven (you can click here as well).  One of the points he makes, albeit somewhat elliptically, is that intervening across the Golan armistice line is politically more difficult for Israel than intervening in Lebanon.  There is less recent precedent for it, of course, but for all the reasons discussed above, it also carriers bigger risks and implications.  Keeping UNDOF in place is a token of regional recognition of that.

But there’s no one with the power now to enforce what UNDOF purportedly stands for, because the spell of its unspoken promise – commitment by the great powers – has already been broken.  Certainly, given Hezbollah’s thorough intimidation and cooption of the UNIFIL mission in southern Lebanon, we should hold out no hope of a better performance from UNDOF, in the absence of U.S. intervention.  UNDOF will be ineffective, at best – if lucky to have the territory of Israel to flee to when it gets in trouble.

And everyone in the area knows it now.  The jihadi attack on UNDOF in late August and September, and its outcome, have shown clearly that there is no armed fist behind the mission.  That signal was followed inevitably by a serious ISIS push to establish a foothold in the Golan.  Iran and Hezbollah are reacting predictably by pushing forward with plans to harass Israel and make her react on a new front in the northeast.

Make no mistake, as the POTUS-in-chief likes to say: this is no short-term plan.  Both Iran/Hezbollah and ISIS envision a strategy that won’t be fulfilled until they plant their flags in Jerusalem.

More of your world without responsible American leadership.

Obama’s Union by the numbers
Next Post
Video: Wolf Blitzer can’t recall ‘another SOTU with so many veto threats’ 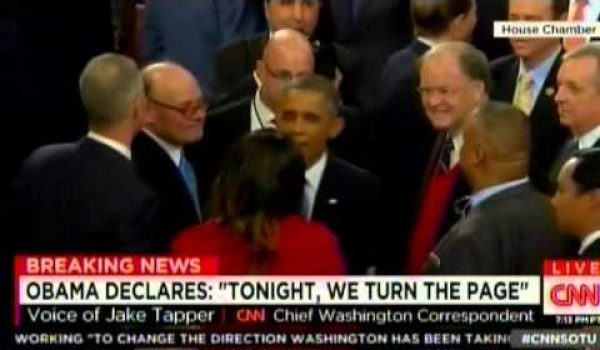